Washington Nationals' skipper Dusty Baker was impressed with what he saw from 22-year-old starter Joe Ross on Sunday in the right-hander's outing against the Miami Marlins in the nation's capital. "Damage control is the key, especially for a young pitcher," Baker said.

Joe Ross made thirteen starts and sixteen appearances overall for the Washington Nationals last season after the 22-year-old right-hander was called up to make his MLB debut in June.

His only action against the Nationals' NL East rivals from Miami came in two relief appearances late, when Ross was moved into a bullpen role to get him the experience of going through a full season in the majors for the first time after he'd shown signs of fatigue in his final few outings in the rotation.

"You can see the velocity, you can see he has a slider and a split finger, but until you actually see the movement on it and the sharpness of it, it's tough to simulate in the video room." -Dusty Baker on Joe Ross having an advantage vs hitters for now

Ross gave up two hits in 1 ⅔ IP in his two relief appearances against the Fish.

This afternoon's outing was his first start against the Marlins, leaving the Philadelphia Phillies as the only divisional rival he hadn't yet faced.

New skipper Dusty Baker talked before Sunday's game about the challenges his young starter would face and need to overcome in his second season in the majors.

"I think that the main challenge is -- I don't know if he's faced Miami or not, I don't think he has -- then not many guys probably know him. I think that advantage goes to the young pitcher until they know him.

"I mean, you can see the velocity, you can see he has a slider and a split finger, but until you actually see the movement on it and the sharpness of it, it's tough to simulate in the video room."

Early in his career, however, Ross will have an advantage over opposing hitters, Baker said.

"I think the advantage is to the young pitcher. Now once the word gets around or once you see a guy and you see his pattern, then it depends on how he adjusts the second and third and fourth and fifth time around," Baker explained.

"That's why I admire guys that have been around for 10-12-14 years and these guys are guys that you know people have studied them.

"You're trying to study sequence with runners on base and you study what he does with bases loaded and what he does -- because if you've had a pattern of success -- that's what you're going to turn to.

"And so the real test comes later I think. And then for a young pitcher, it's about how he masters and how he controls the strike zone, and how he handles when he's in trouble.

"Does he panic, or does he -- because I remember, man, Fernando [Valenzuela] was a young player and Fernando was the best I've ever seen.

"He'd back off the mound, and I'd be in the outfield, when he was in trouble, he'd take the air out of the ball, like, so to speak, like basketball.

"He'd call a timeout and just rub the ball up, then he'd get back on the mound again and then once he started rolling then he'd start rushing you. So it's a matter of how handles trouble more than success."

"That could have turned into a three or four-run inning, but damage control is the key, especially for a young pitcher, and after that he was masterful." -Dusty Baker on Joe Ross battling through a tough first vs Miami

Baker was also concerned about how Ross would handle a relatively long layoff between outings.

Before Sunday's start, his last outing was against the Minnesota Twins on April 2nd.

He was supposed to start on Saturday, but that game was rained out.

So his 2016 debut was pushed back to Sunday afternoon.

"He got rained out like two or three times in a row," Baker said. "And then, I'm hoping that he pitches with his mind instead of really his body, because he hasn't been out there that much to repeat his delivery."

Ross ran into trouble in the first, giving up a leadoff triple on the first pitch to Marlins' second baseman Dee Gordon and a one-out walk to Christian Yelich, which is never a good idea with Giancarlo Stanton on deck.

Stanton singled, driving in the game's first run to put Miami up, 1-0.

Ross did, however, bounce back and get an inning-ending double play grounder out of Martin Prado to end the top of the first, and when the Nats tied up in the bottom of the inning, he proceeded to toss six scoreless innings, working out of trouble when he got in it to keep it tied at 1-1 before the Nationals broke it open with a three-run seventh.

"In the first inning he got off to a little slow start," Baker said after what ended up a 4-2 win.

But, I mean when Dee Gordon hits that opening pitch for a triple, sometimes he can ambush you like that and then to hold them to one run, that's what I told Joe, 'You just learned damage control today.'

"That could have turned into a three or four-run inning, but damage control is the key, especially for a young pitcher, and after that he was masterful."

"He had quite a few 3-2 counts there, but a couple double plays got him out of trouble and he made some pitches when he had to make them."

He also held Gordon in check when the defending NL Batting champ singled to start the Marlins' sixth.

Ross got up 0-2 while holding Gordon at first with three accurate throws over, varying his hold times while being quick to the plate in striking out Marcell Ozuna.

He checked Gordon with Christian Yelich at the plate too, throwing over four times before he and Ramos combined for a caught stealing on a 2-1 fastball.

In spite of his relative inexperience, Baker said, Ross handled that battle with Gordon like a veteran. 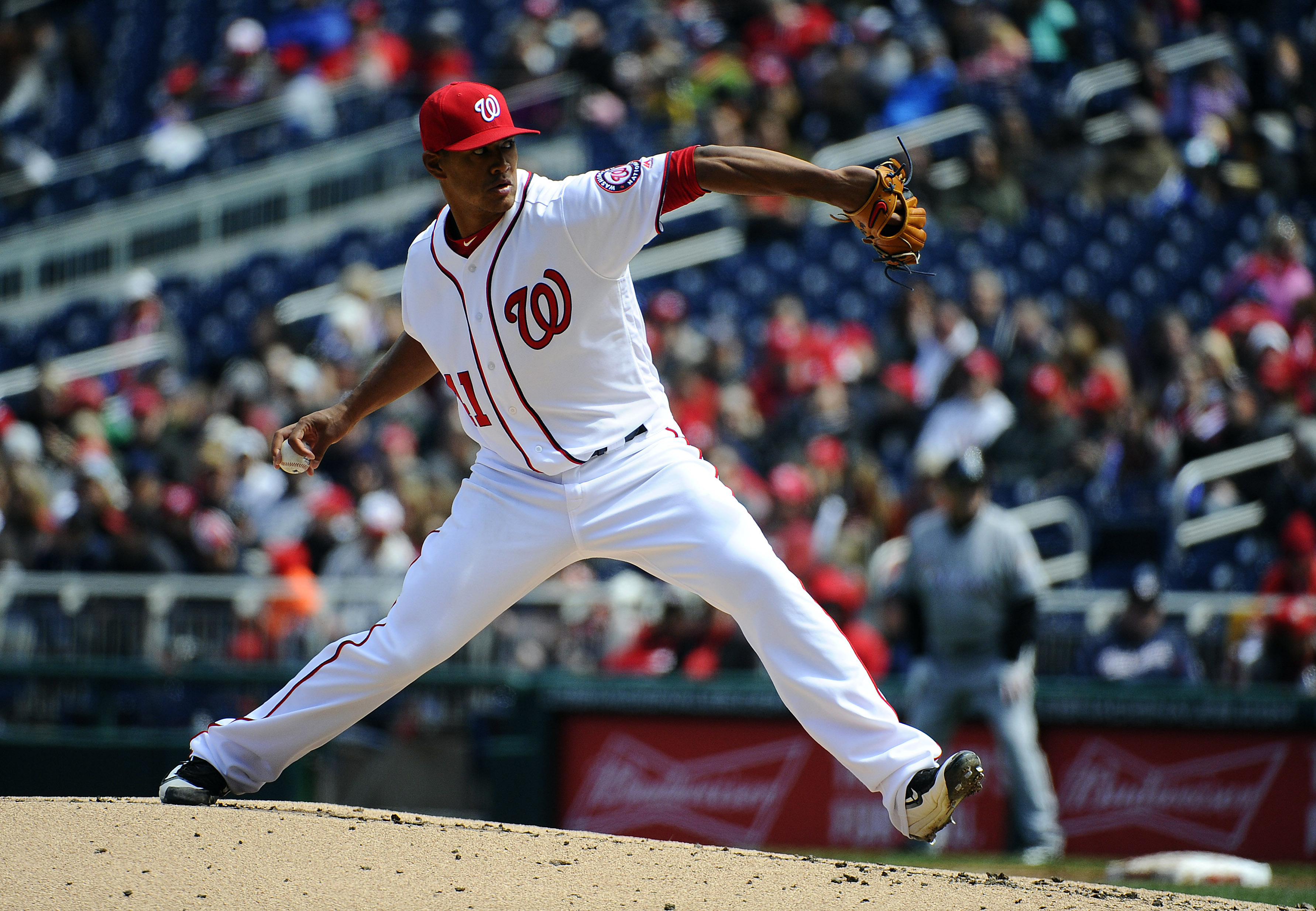 "He's 22, but he comes from a great family, his brother has been in pro ball for a while. He knows what he's doing and he's not intimidated by any situation and the fact that he threw the ball so accurately to first base -- how many times have you seen guys try to pick guys off and throw a ball away? That was great.

"And then Wilson [Ramos] threw one on the money. Dee Gordon is hard to throw out. That was a big play. You hate for Dee Gordon to get on base, especially with none or one out, because this guy can wreak havoc."

Ross battled through a rough first, held Gordon in check on the basepaths, struck out five, got seven ground ball outs and two double play grounders over seven innings in which he allowed just five hits and he got the win when the Nats rallied in the bottom of the seventh.

He also impressed his manager with his "masterful" performance.

• NATS NIGHTLY: We talked about Ross vs the Marlins; Jayson Werth's big hit, Blake Treinen's relief work and more after the Nationals' win over the Fish: