Washington Nationals' starter Max Scherzer was not particularly sharp in last night's outing against the Atlanta Braves, but he finished strong and the Nats' hitters picked their starter up, battling back from an early deficit in what ended up a 6-4 win.

Share All sharing options for: Nationals pick Max Scherzer up after rough start vs Braves in 6-4 win

Max Scherzer gave up four runs on five hits in the first two innings last night, in his second start of the year, which was also his second outing against the Atlanta Braves.

Scherzer held the Nationals' NL East rivals to two runs on three hits in seven innings in the season opener in Atlanta last week, but the 31-year-old right-hander gave up two runs in the first inning last night in his first start in the nation's capital, then gave up another two runs in the second.

"This is a good team," Scherzer told MASN's Johnny Holliday and Ray Knight after what ended up a 6-4 win in spite of his early struggles on the mound.

"They just saw me, they saw all my pitches and they put together some really good ABs against me there in the first couple innings..." -Max Scherzer on facing the Atlanta Braves twice early this season

He did finish strong, limiting the Braves to just one hit over the next four innings, and holding them off the board as the Nationals rallied to tie it and eventually take the lead, earning their eleventh straight win over Atlanta in Washington.

After the rough first, the biggest test came in the top of the fifth inning, when Nick Markakis doubled to start the frame and moved to third on a groundout by Freddie Freeman, who'd gotten free passes (one intentional) in his first two trips to the plate.

Adonis Garcia, who homered off Scherzer in Atlanta and singled to drive in a run in the first last night, fell behind 1-2 and chased a diving 84 mph change out of the zone for a swinging strike three and out No. 2.

A groundout by A.J. Pierzynski ended the threat and Wilson Ramos then drove in the go-ahead run in the bottom of the inning.

"I went out there and made some big pitches when I needed to and I think the at bat of the game was against Garcia when we had a 4-4 tie, man on third with one out and was able to get a big strikeout," Scherzer said.

"I really felt that that set the stage, some momentum to keep us going and [Ramos] came up big, got a big RBI knock and we were able to continue on and get the win."

"That's Scherzer. This guy has as much determination and competitive drive of any guy I've seen in a long time. He really wants to win, wants to win badly." -Dusty Baker on Max Scherzer battling last night

Scherzer hung around long enough to get the decision as well, which made his manager happy.

"I'm glad Scherzer got the win," Dusty Baker told reporters, "because I heard last year he was the recipient of not many runs, so today we picked him up.

"He wasn't real sharp. Neither pitcher was sharp really. So I figured it was going to be an offensive game.

Scherzer ended up throwing 100 pitches total in six innings of work, 46 of them in the first two innings.

Baker said he was impressed with the right-hander's approach as he battled through his outing.

Scherzer talked about what he took from the start, including the fact that the Nationals' hitters picked him up.

He was asked if there was less pressure to be perfect when the offense is putting up runs?

"For me, I welcome pressure," he said. "I want to be in the situation. I want to have the ball in the big situation.

"And tonight was one of those games where I faltered a little early, I understand that, but the offense came back and tied the game and it was up to me to extend this game as long as possible and keep on throwing up zeroes as well as I can to give us a chance to get one more run and that could be the game-winning run."

"I always say that you can usually judge your outing on the last 15 pitches you throw," Scherzer told reporters, including MASNSports.com's Mark Zuckerman.

Nationals 6-4 over Braves for 11th straight win over ATL in D.C. 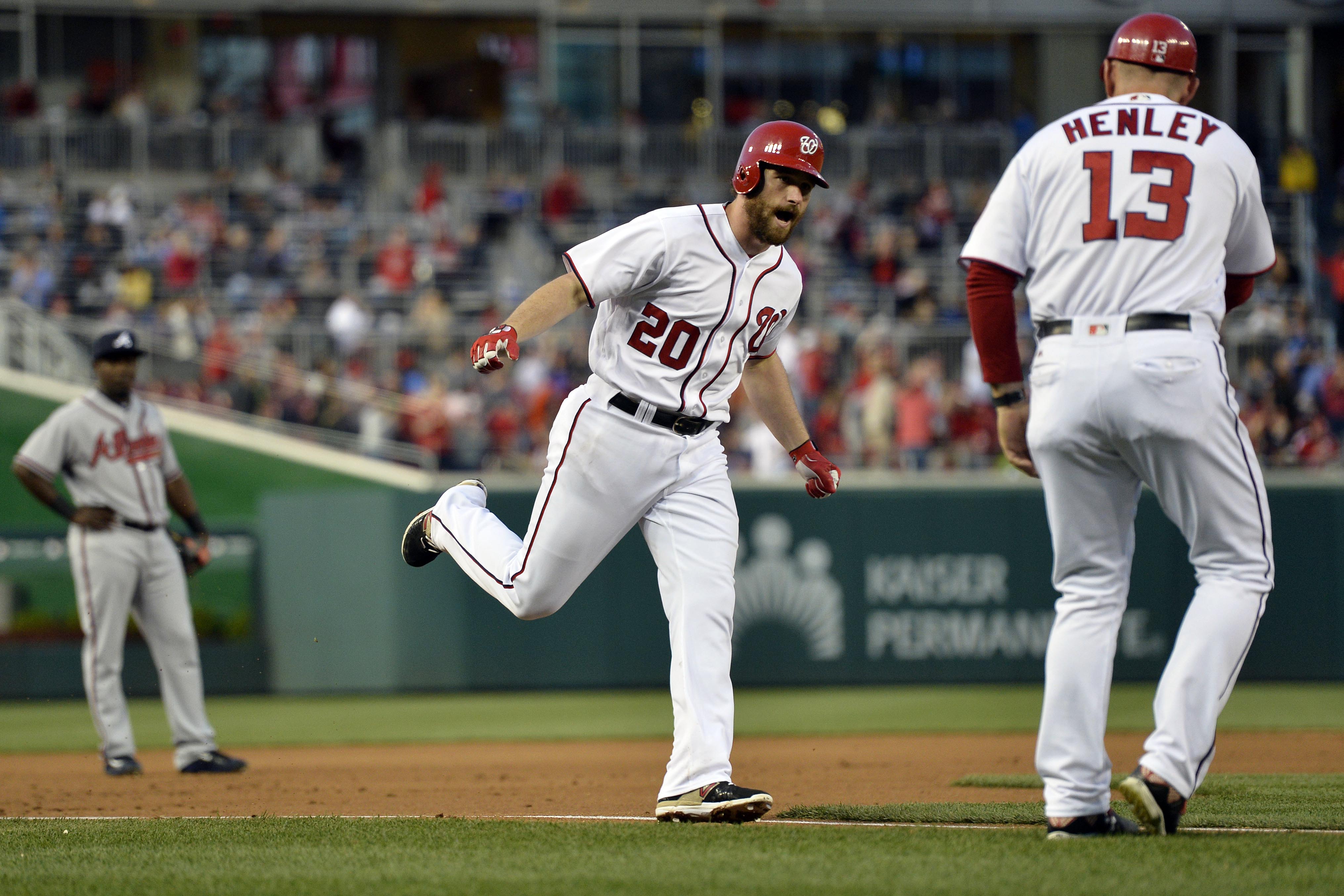 "Those are typically your most important pitches. And tonight, in the sixth inning and with the last 15 pitches, I was able to get a clean inning."

And the Nationals were able to get a win on a night when Scherzer wasn't sharp and Bryce Harper was held hitless.

"It can't be Bryce and Scherzer every night, that's why you have a team," Baker said. "Bryce hit the ball pretty good a couple times, they made some good plays on him, they played him correctly, but we had other guys step up tonight and hopefully before too long we'll have everybody sharp. And I'm just waiting to sit back on the days when everybody -- I hope it comes -- when everybody is on -- we're operating on full cylinders. That's a manager's dream kind of."