Gio Gonzalez made his 2016 debut for the Washington Nationals last night in the Nats' 2-1 win over the Atlanta Braves, tossing six scoreless innings, collecting a hit and impressing his new manager in the process. Gonzalez was just happy to get started...

Share All sharing options for: Gio Gonzalez finally returns to mound in Nationals' 2-1 win over the Braves

Gio Gonzalez hadn't pitched in competitive action since March 27 before he took the mound last night against the Atlanta Braves in Nationals Park.

That's sixteen days off between outings, though he'd thrown bullpen sessions as he waited to make his 2016 debut.

Dusty Baker told reporters before the game that there wouldn't be any pitch or inning limitations on Washington's 30-year-old left-hander.

"Just a performance limitation," he said.

"I urged Gio to kind of pitch with his mind... 'What would I do in this situation? Who would I pitch around?' Just different things, so when you get out there you don't feel as if you've ever left." -Dusty Baker on keeping Gio Gonzalez sharp before 2016 debut

"He rarely leaves the dugout and you know, you pitch with your mind: 'What would I do in this situation? Who would I pitch around?' Just different things, so when you get out there you don't feel as if you've ever left."

Baker watched Gonzalez throw this Spring, but most of his history was on the other end of Gonzalez's stuff when he was a manager with the Cincinnati Reds.

So what did he think of the left-hander before he became Gonzalez's manager?

"He was trying to find consistency,"Baker said, "that was my opinion of him."

"But that's being a young pitcher and that's being a guy that relied on his stuff for success, and so we're just trying at this point to get him over the hump to be more consistent."

This Spring, the talk was of the mechanical adjustments that Gonzalez was making as he worked with new pitching coach Mike Maddux, who had the left-hander picking up his target earlier in his delivery than he had previously.

"I'm going to try to minimize my walks," Gonzalez explained in an interview on 106.7 the FAN in D.C. this Spring.

"He had an outstanding changeup, pretty good curveball when needed and he had good location on his fastball. And so he was very good tonight." -Dusty Baker on Gio Gonzalez's 2016 debut

"I want to be more aggressive in the strike zone and now I think, with the new mechanics, with Mike making me watch the strike zone the entire time, I think I can pick up my target a little bit more."

The early returns were positive.

Gonzalez's pitch count got up a bit in his season debut, but he was able to limit the walks to one and he allowed just three hits in six innings of work against the Braves last night, striking out four batters in a 95-pitch effort.

"You wouldn't know that he had missed two weeks. And like I said earlier [today] in the interview, to pitch with his mind earlier. So you could tell he was very calm. He didn't have many baserunners. He had an outstanding changeup, pretty good curveball when needed and he had good location on his fastball. And so he was very good tonight."

In his post start interview with MASN's Johnny Holliday and Ray Knight, Gonzalez said he was just happy to get his first start over with after the long wait.

As usual, however, he pointed to his catcher as the reason for his success.

"I've got to give credit to [Jose] Lobaton," Gonzalez said. "He was unbelievable back there."

Bryce Harper, who came up with the game-winning hit, praised Gonzalez so he wouldn't have to do it himself.

"I thought Gio looked great," Harper said. "That's big-time stuff right there. That's the stuff that we need out of him every time that he goes out there." 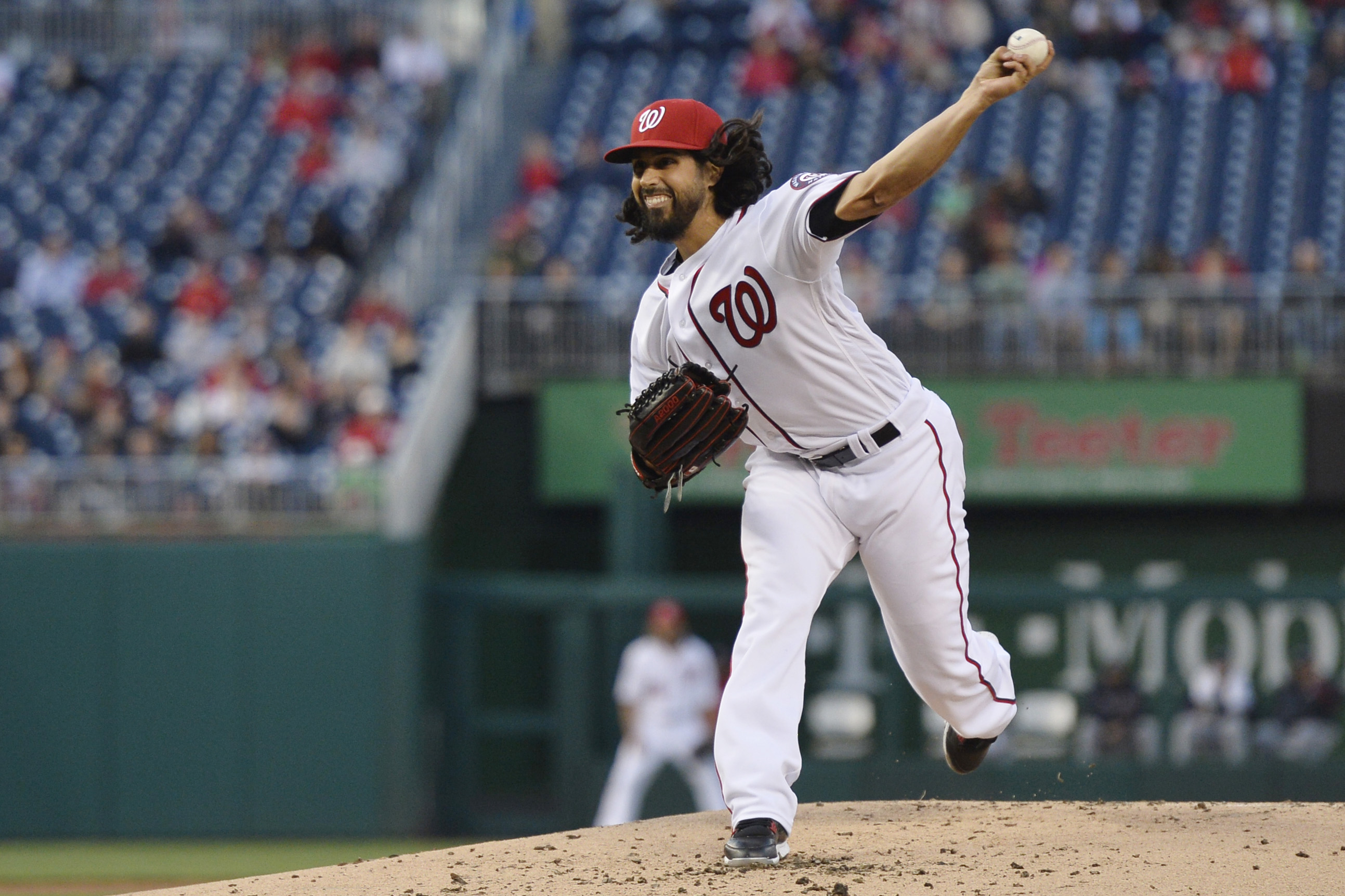 Gonzalez was happy with the results and the way the changes he and Maddux made paid off early in his fifth season in D.C.

"A little more focused, picking up my target a little earlier. Felt like I was locked in to where I wanted to be. Just a bunch of things where I kind slowed the game which is what I wanted."

He also singled in his first at bat of the season, then showed off his speed going first-to-third on a hit by Michael A. Taylor.

"[Gonzalez] was a complete player tonight," Baker said. "And I'm sure we'll probably hear about it tomorrow. That was a very good game for Gio."