Given twenty-four hours notice that he might have to start in place of a sick Stephen Strasburg, Tanner Roark came up big with a solid outing and seven scoreless for the Washington Nationals in their 3-0 win over the Atlanta Braves on Wednesday night.

Stephen Strasburg was a late scratch as far as the announcement Wednesday afternoon, but the Washington Nationals were well aware that he was sick and they were able to give 29-year-old righty Tanner Roark plenty of warning that he might be called upon to go against the Atlanta Braves.

"We gave him 24-hour notice and we told him to be ready and that he was most likely to pitch," Nats' skipper Dusty Baker told reporters before the third game of three with the Braves in D.C.

"I think this is his regular day anyway," Baker said. "So things worked out. We'll get this rotation sooner or later the way we planned it."

"Gave us seven innings, got our bullpen kind of back in order and we're ready to roll. We got some big, big hits." -Dusty Baker on Tanner Roark's solid outing vs the Braves

Roark, at least, had some warning and was able to prepare for the possibility that he would get the ball.

"Sometimes there are a lot things you have to adjust to and these guys around here, they're pretty good at adjusting.

"Tanner is the type of guy, he'll take the ball almost any time. So we have full confidence that he'll go out and throw a gem."

Strasburg could, Baker explained, return to the mound on Thursday afternoon, since he's shown improvement over the last few days.

"We'd like to think that Stras will be ready tomorrow and if he's not then we'll come up with another solution."

"He was really sick yesterday and so he feels better today than he did yesterday. And actually I heard him like really hocking two days ago, looked around the corner and it was him and I was like, 'Oh, no.'

So... Roark got the call and came through for the Nationals in a big way Wednesday night, throwing seven scoreless innings on 100 pitches and sparing the bullpen a potentially long night while helping to erase the memory of his less-than-stellar, rain-interrupted 2016 debut.

Baker said he'd already put Roark's first start of the season behind him.

"I threw it out the window," he said. "You can't bring it back. You can't dwell on that. I mean, this is a new day and so I didn't even think about that."

What he was thinking about was the potential trouble that could arise if Roark struggled to go deep and he had to rely on his bullpen for a long stretch of innings either tonight or tomorrow if Strasburg was unavailable.

Baker was asked who would they turn to in either of those scenarios?

"[Yusmeiro] Petit," he suggested. "That's why we got him. He'll spot start, be a long man, and that's what he did for the Giants so well.

"That would really help us tonight, sort of, but we're hoping Tanner goes deep in the game, a complete game shutout would be wonderful."

Roark didn't go the distance, but he was effective and provided all he could before he was hit for in the bottom of the seventh inning.

"It looks like a ball and by the time you see it's a strike your only hope is that the umpire will call it a ball." -Dusty Baker on Tanner Roark's sinker inside to left-handed hitters

"We gave him, like I said, twenty-four hours to prepare, and he came through, big time," Baker said after the Nationals' 3-0 win.

"Gave us seven innings, got our bullpen kind of back in order and we're ready to roll. We got some big, big hits."

The big hits, were home runs by Stephen Drew and Jayson Werth in the fourth inning, after Braves' starter Matt Wisler rolled through three scoreless.

"I was on plenty of days rest," Roark said. "We had that rainout and then that off day, so I still felt strong, ready to go, just had to get the good night's sleep and get ready to go."

Baker was asked what he saw from Roark that made his so effective throughout his seven scoreless frames.

"I think the main thing I saw is he had a very good changeup and he was throwing some first-pitch curveball strikes," he said.

"That's huge. [Wilson Ramos] was directing him in the game. He got a little out of sorts with his fastball, he was throwing it up sometimes, but then he'd come right back and battle and get it back together."

"Locating the fastball and just executing pitches for the most part," Roark said when he was asked the same.

He too noted the contributions Ramos made from behind home plate.

"I've got to credit a lot to [Ramos] because he called a great game and I was executing pitches."

Roark's sinker, in particular, was a weapon last night, breaking back in on lefties like Freddie Freeman, who was caught looking for a called strike three when the Braves threatened with runners on second and third and two outs in the fifth.

"It's some big hitters. You saw Freddie Freeman, you rarely see him go down like that. I think he threw another one on [Erick] Aybar, that comeback sinker on the inside and that's a tough pitch. 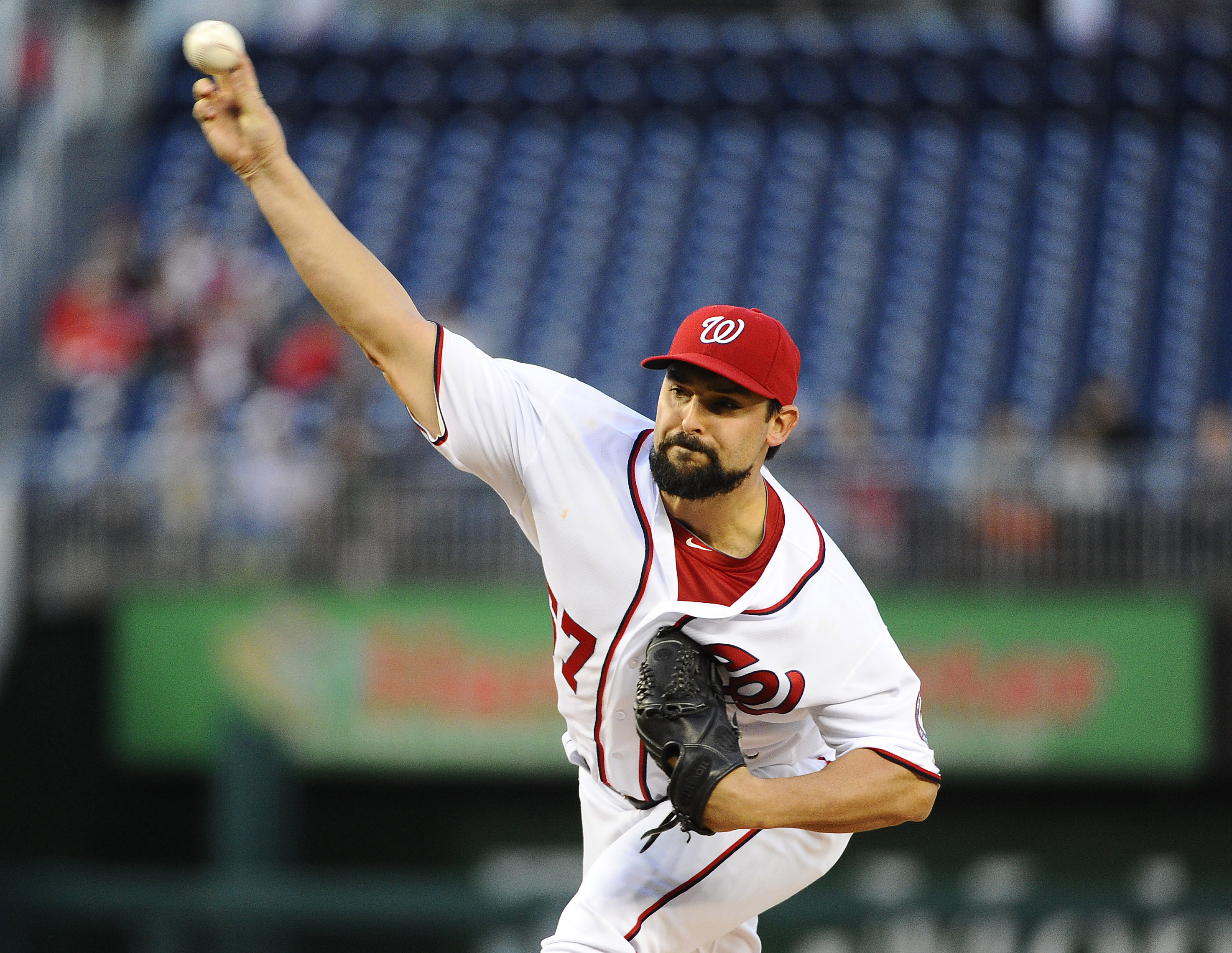 "It looks like a ball and by the time you see it's a strike your only hope is that the umpire will call it a ball. Like i said, [Ramos] directed him big time, and is that our first shutout of the year? You always want that."

Seven of eight batters that Braves' skipper Fredi Gonzalez lined up last night were lefties (six lefties, one switch-hitter actually), so Roark's sinking fastball inside to the left-handers was an important pitch.

Roark said that didn't alter his approach based on the lineup, however.

"I've got to pitch my game. You can't let a plethora of lefties make your game switch. You've got to keep going at them, keep attacking and pitch inside."

He was proud of himself for throwing the word "plethora" in there, giving a nod to reporters after he did.