Dusty Baker on getting to know Nationals' ace Max Scherzer: No high-fives, please

"He has some idiosyncrasies that work for him and he's a heck of a guy and a heck of a competitor and I was warned from the beginning to look him in one eye or the other." - Dusty Baker on getting to know Washington Nationals' starter Max Scherzer.

Share All sharing options for: Dusty Baker on getting to know Nationals' ace Max Scherzer: No high-fives, please

Dusty Baker learned early this Spring that Max Scherzer doesn't like too much interaction in the dugout during his starts.

"One thing I learned today," Baker told reporters, including MASNSports.com's Pete Kerzel after a mid-March outing by the 31-year-old righty, "... is you don’t give him five when he comes in the dugout. He looks right through you with one of those eyes you got. You just leave him alone.

"You don't give him [high] fives, you just leave him alone while he's pitching. He has some idiosyncrasies that work for him and he's a heck of a guy..." -Dusty Baker on getting to know Nationals' starter Max Scherzer

Baker has been getting to know all of Washington's players, new and old, as he settles in on the Nationals' bench.

An inordinate amount of the information/advice he has been given, apparently, has to deal with interacting with Scherzer.

Before Opening Day, he said he was learning a lot about his staff ace, like how to talk to Scherzer without focusing on the fact that the right-hander has two different colored eyes.

"What struck me is that you don't give him [high] fives, you just leave him alone while he's pitching. He has some idiosyncrasies that work for him and he's a heck of a guy and a heck of a competitor and I was warned from the beginning to look him in one eye or the other. Don't look at both of them, I was told. So I tried to make a conscious effort to just look at one side of his face."

Baker brought the fact that you just don't talk to Scherzer during his starts up again last week, while discussing his own reaction to a big hit by Bryce Harper the previous night.

Baker was captured on camera pumping his fist and screaming profanities he said he thought would earn him a call from his mother.

He was asked if he cheered and hollered [profanities] in part to motivate his players?

"I don't do it for them," he said. "I do it because that's how I feel. If they get something out of it, that's fine. And if they don't, like Scherzer, he doesn't like me giving him fives, so, you put your hands in your pockets.

"Different guys are different ways. So when they show that they don't like it, then you don't do it."

Or... at least you pick your spots.

When Scherzer hits a two-run double like he did after Philadelphia righty Aaron Nola walked Danny Espinosa to get to him in the fourth inning of Saturday night's win over the Phillies, he's apparently more open to interaction.

Did he let Baker high-five him?

Wilson Ramos doubled with two down, prompting the Phillies to walk Espinosa intentionally to get to the pitcher's spot and Scherzer made them pay, lining an 0-1 fastball to right for an opposite field double that drove in both runners and put the Nationals up 5-0 in the second game of their three-game set in Citizens Bank Park.

"That was huge," Baker said. "That was real big. That's the play. That's what you're supposed to do. Just the pitcher got the fastball up and out over the plate and Max hit it. Sometimes you're going to get burned. It doesn't matter who you are, just sometimes the pitcher is going to get a hit."

Scherzer went 1 for 3 at the plate. He went seven innings on the mound, throwing 108 pitches total, and allowing five hits, one walk and one earned run on a home run to left by catcher Cameron Rupp.

"He was very good," Baker said.

"Other than having quite a few deep counts. That's what cost him his pitch count. But I mean, he threw the ball great." 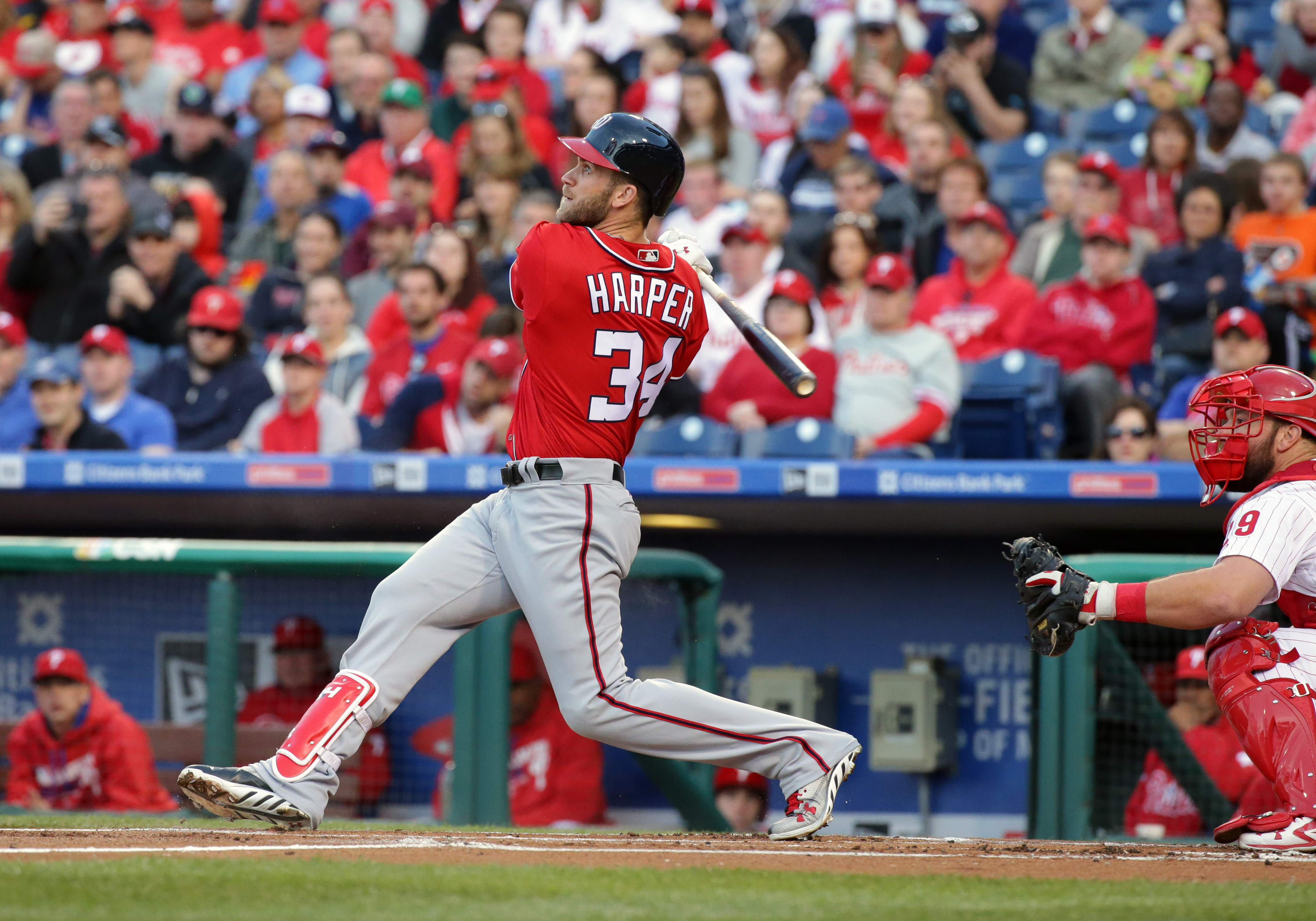 The Nationals jumped out to an early lead for the second straight night and they added runs again, in what ended up an 8-1 win.

"It's two days in a row," Baker told reporters. "Michael [A. Taylor] gets on and then we're up 3-0 today, we were up 5-0 yesterday, and that's what we really concentrated on in Spring Training. I'm hoping for good things to come like this for us.

"We can keep jumping them, that's big time, because I was told that [Scherzer] didn't get too many runs last year, especially early, so if we get him runs he knows what to do with them."

The win was the Nationals' seventh straight overall and their fifth straight over the Phillies in Citizens Bank. They try to make it eight in a row overall and six straight in Philadelphia  when they play the third game of the series at 1:35 PM.