Nationals' Stephen Strasburg off to a strong start in what could be last season in D.C.

Washington Nationals' starter Stephen Strasburg struck out ten Miami Marlins in eight scoreless innings earlier this week, and the 27-year-old right-hander is off to a strong start in what could be his final season in the nation's capital.

Share All sharing options for: Nationals' Stephen Strasburg off to a strong start in what could be last season in D.C.

Stephen Strasburg's agent, Scott Boras, told FOXSports.com's Jon Morosi this Spring that the Washington Nationals and their 2009 No. 1 overall pick, Stephen Strasburg, were not actively discussing a deal that could keep him in the nation's capital beyond 2016, and weren't likely to talk about one until the season was over.

Strasburg and the Nationals avoided arbitration this winter, agreeing on a 1-year/$10.4M deal, but beyond that, there were no discussions about a long-term agreement.

Nationals' GM Mike Rizzo, in an interview on 106.7 the FAN this Spring, was asked about Strasburg heading into his walk year and potentially testing free agency.

"Stras threw great tonight," Bryce Harper said. "I mean, just incredible. A lot of fun to watch, and that was very special tonight what he did." -Bryce Harper on Stephen Strasburg vs the Marlins

"Strasburg is at the cusp of becoming a free agent. We've always had a good working relationship with Stras. He's been a good asset to the organization. We certainly are going to have overtures and discussions with him to try to keep him here, but as we've seen in the past it takes two to tango, and it takes two to make it a deal.

"We're going to make him a good, market-value offer at some time either in the offseason or during the season."

After watching Strasburg make four starts up close this Spring, new Nationals' skipper Dusty Baker told reporters that he expected the 27-year-old right-hander to have a big 2016 campaign.

I think Stras is going to have a big year, a real big year," Baker said, as quoted by the Washington Post.

In his last outing, earlier this week, against the Marlins in Miami, Strasburg threw eight scoreless innings, walking two and striking out ten.

"Stras was masterful," Baker told reporters after the win. "We wanted to take him out because he had been sick, and we've got a long stretch of games here, so we've got to preserve him for the year even though you want your pitcher to get a shutout, it's not that often that you get them, but we had to decide between what's good for him and what's good for the team."

"Stras threw great tonight," Bryce Harper said. "I mean, just incredible. A lot of fun to watch, and that was very special tonight what he did."

Baker said Strasburg's demeanor on the mound, and the way he went about his work was just as impressive as the results.

"He goes about it in a very calm and almost, I don't know, you don't really see him get excited," Baker explained.

"To me, they told me he finished strong last year, so he picked up where he left off last year, and they told me that he usually doesn't start this fast, so that's a positive sign for him and us that he's gotten off to a very quick start.

"He's not walking people, it's hard to get consecutive hits off the guy, so, boy, like I said earlier, I just felt he was in for a big year, and he started off 3-0, so that's good for us and good for him."

"He goes about it in a very calm and almost, I don't know, you don't really see him get excited... they told me he finished strong last year, so he picked up where he left off last year..." -Dusty Baker on Stephen Strasburg vs the Marlins

Strasburg and Marlins' starter Adam Conley battled through six scoreless frames before the Nationals exploded with four home runs and seven runs total in the top of the seventh.

Strasburg returned to the mound and retired six straight on 22 pitches. He retired 14 of the last 15 batters he faced in Miami, with no noticeable change after the Nationals took the lead.

"As a pitcher you try to not pitch to the scoreboard, you try to do your job," Strasburg said afterwards.

"Obviously with the seven runs there [in the seventh], it's easy to let up and change how you go about your business, but I made it point to not do that and just keep attacking the hitters."

With the possibility of becoming a free agent looming once this season ends, Strasburg was asked about carrying over the success he had late in 2015, but he said he was just focused on each outing, each pitch.

"I'm just trying to get better every time, trying to do my homework, trying to prepare as much as I can for each outing, and when I toe the rubber just go out there and compete and give it all I've got."

Max Scherzer on tough start vs Marlins: "This is not a mechanical breakdown..." 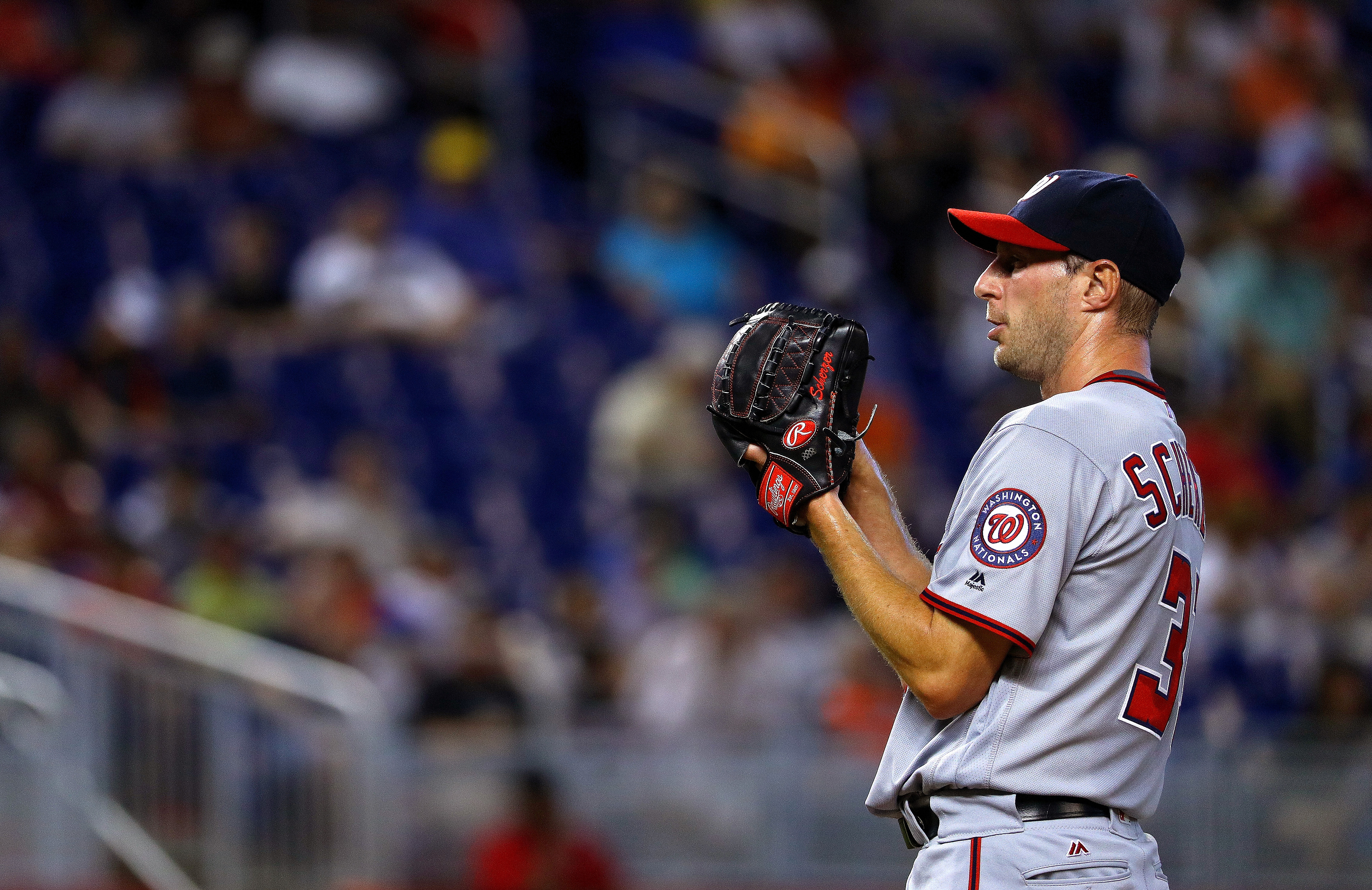 Strasburg's determined not to let anything distract him, whether it's what's going on in the game, or what's taking place off the field.

So is there any chance that he'll be pitching in a Nationals uniform again in 2017?

"My answer is it takes two to tango," Rizzo reiterated to 106.7 the FAN's The Sports Junkies when asked about a long-term deal for Strasburg again this week.

We should probably all just take Strasburg's approach and enjoy every pitch and every inning while we can and worry about the future later.