Through six innings on the mound last night in Nationals Park, Washington's 30-year-old lefty Gio Gonzalez was a picture of calm. The seventh got interesting, but Gonzalez put together another solid outing in what is a strong start to the 2016 campaign.

Share All sharing options for: Zen and the Art of Gio Gonzalez: Nationals' lefty impresses again with command, poise

Gio Gonzalez earned his reputation for wearing his emotions on his sleeve over his first few seasons in D.C., but the Washington Nationals' lefty has adopted a calmer demeanor on the mound early this year.

Is it behind his early-season success? It hasn't hurt.

"There are certain things that translate to either fear, or I'm not afraid of you. Whether it's fake or true, it still serves a purpose." -Dusty Baker on pitchers remaining calm on the mound

Nats' skipper Dusty Baker said Gonzalez's mound presence and the changes he's made this season are something they've discussed when a reporter noted that the left-hander has occasionally stepped off the mound to calm things down when he's gotten in trouble in his first two outings, whereas in the past he might have been talking to himself and making his frustration clear.

"I had talked to him in the past and also some other people," Baker explained before Gonzalez took the mound to face the visiting Minnesota Twins.

"I had told him about [what] Fernando Valenzuela did as a young player, as a very young pitcher.

"He'd walk behind the mound, call timeout, rub the ball up, and I think [Anthony] Rendon has really taken it upon himself to call a timeout for him sometimes.

"Rendon, I've seen him go to the mound two or three times within the course of a game.

Baker, as a former major league hitter, said he used to like seeing a pitcher get rattled when things got rough.

"We would say he was 'visibly shaken'," Baker said. "You like to see that look on a pitcher's face if I'm facing him.

"You don't like to see the look of controlled anger or no expression on the pitcher's face.

"There are certain things that translate to either fear, or I'm not afraid of you. Whether it's fake or true, it still serves a purpose."

In start No. 3 of his fifth season in D.C., Gonzalez once again kept his emotions under control as he battled for six plus innings, striking out eight of the 26 batters he faced while inducing seven ground ball outs from Twins' hitters.

In the end, he allowed six hits and three runs, two earned, in an 8-4 win.

Back-to-back singles and a base-loading walk in the seventh brought Gonzalez's outing to a close.

"Probably the command of his pitches and the calmness with which he's approaching pitching," Baker said. "He appeared very confident and calm. That's what's been most impressive." -Dusty Baker on Gio Gonzalez vs the Twins

"Gio was great until the seventh," Baker told reporters after the win.

"He didn't want to come out, but at that time they were threatening."

"American League teams are very capable, big inning teams, kind of like we are. So, tried to stop it. We did.

"[Shawn] Kelley came in and got a big strikeout and almost got a double play to get us out of that inning and then the rest of the bullpen did the job."

"Probably the command of his pitches and the calmness with which he's approaching pitching," he said. "He appeared very confident and calm. That's what's been most impressive.

"We would have loved for him to go through that [seventh] inning, but he was around the 85-to-88 mark and we just thought that that was enough. Especially with the capable bullpen that we have."

Gonzalez, as usual, praised the work everyone else did to help him out on the mound.

"I've got to give credit to my catcher and my pitching coach," he said. 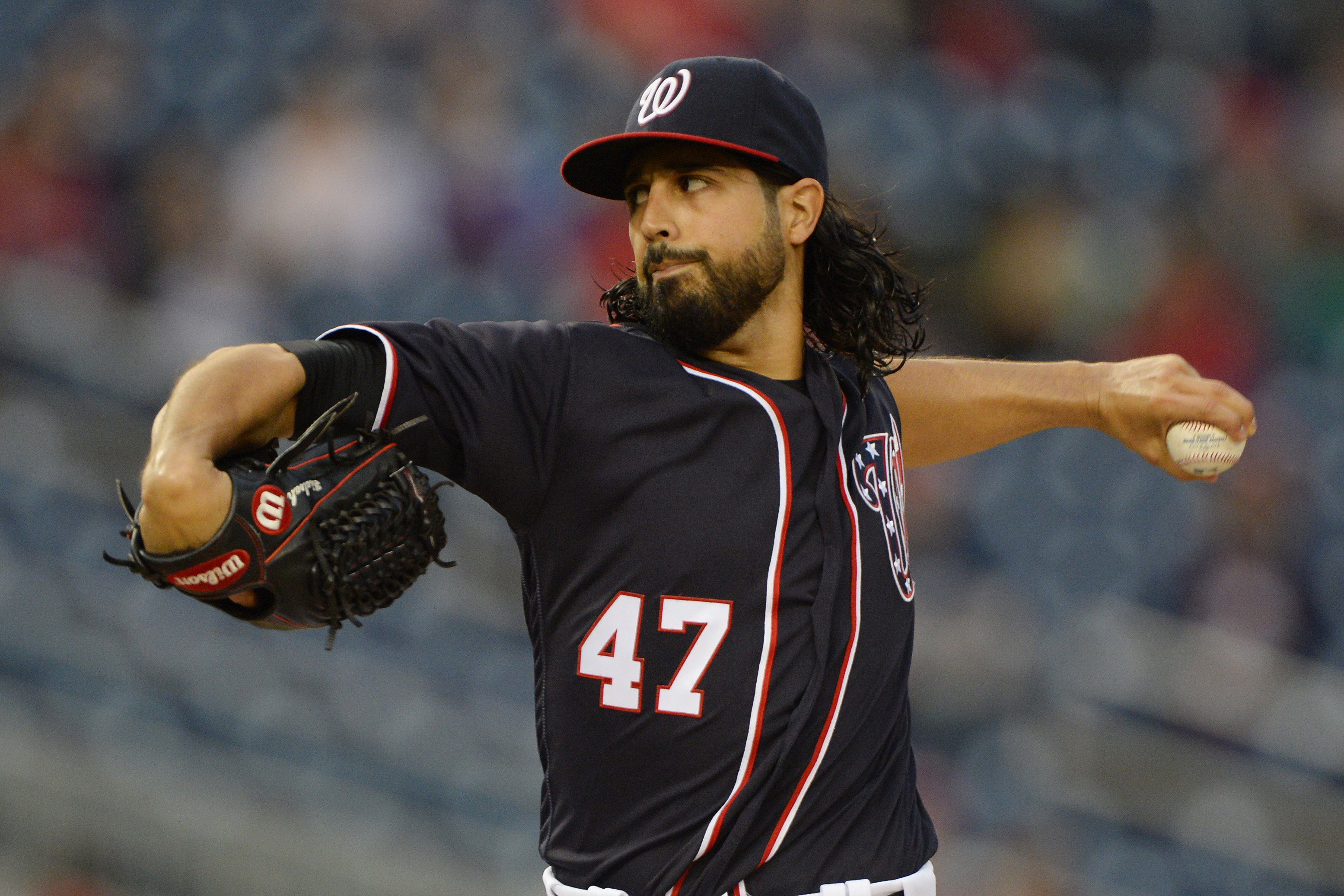 "These guys have been -- we've been working on this in the bullpen, mechanics, just picking up the target and locking in and stuff... also warming up with [Jonathan Papelbon] and trying to stay closed and trying to pick up the target early, so as far as that, that was our game plan for tonight.

"Just try to pick up as much as I can, stay on target and mix it in and out. That's a good-hitting team, they just kept swinging, kept swinging. I was trying to move the ball up and down, side to side, but it was tough.

"There was no rhythm with them, there was no pattern, they just kept going, kept swinging and I tried to do my best to keep the ball down."