Dusty Baker on the Nationals' "Twilight Zone" win on Sunday, Bryce Harper and the Nats' start

Dusty Baker told a reporter who asked how he felt coming out of Sunday's sixteen-inning win over the Minnesota Twins that he felt like he just stepped out of the Twilight Zone. Baker talked after the game and again on Monday about the crazy win in Washington.

Share All sharing options for: Dusty Baker on the Nationals' "Twilight Zone" win on Sunday, Bryce Harper and the Nats' start

"How do I feel?" Dusty Baker asked rhetorically when a reporter wondered how he came through the Washington Nationals' sixteen-inning marathon with the Minnesota Twins on Sunday afternoon.

"I feel like I just came out of the Twilight Zone," Baker said.

"I love these guys, they don't give up. They seemed unfazed by it and act like they knew we were going to win and we did. That's the power of belief." -Dusty Baker on the Nationals' win over the Twins

"I mean, man, that was some game. That was a roller coaster game of emotions. You're down to your last out, pitcher hitting, we left a ton of men out there on base, but these guys, I love these guys, they don't give up.

"They seemed unfazed by it and act like they knew we were going to win and we did. That's the power of belief."

Returning to the power of belief again later in his post game interview, Baker talked about Bryce Harper's ninth inning, game-tying home run that sent the game into extra innings.

Harper, Baker explained, went to the plate in the pinch hit appearance thinking he could get it done and after working the count full against Twins' closer Kevin Jepsen, he got it done, hitting a solo blast to straight center field in Nationals park.

"He believed that he was going to do it, that's what impressed me the most," Baker said.

"I mean, confidence is not his problem. You know what I mean? Everything he does, he doesn't seem surprised and I'm not surprised, but I'm extremely happy and I'm sure he is too."

In an MLB Network Radio interview on the Nationals' off day on Monday, Baker was asked if he was surprised that the Twins even pitched to Harper the way he's been hitting in the last season-plus?

"The thing about it is you couldn't put the tying run on base when you've got the top of the order coming up behind him either," he explained.

"That's the whole challenge of baseball, is getting the best out. You tell your pitcher to walk this guy, are you telling him that he's not one of the best? And so that's the beauty of sports, are the challenges that are going to arise any given time."

The win left the Nationals 14-4 on the year and 8-1 at home in the nation's capital, where they start a three-game series with the Philadelphia Phillies tonight.

While they were prohibitive favorites to win the division in 2015, the expectations weren't nearly as high heading into this season.

So, Baker was asked, has the underdog role they found themselves in this season let them play with less pressure? 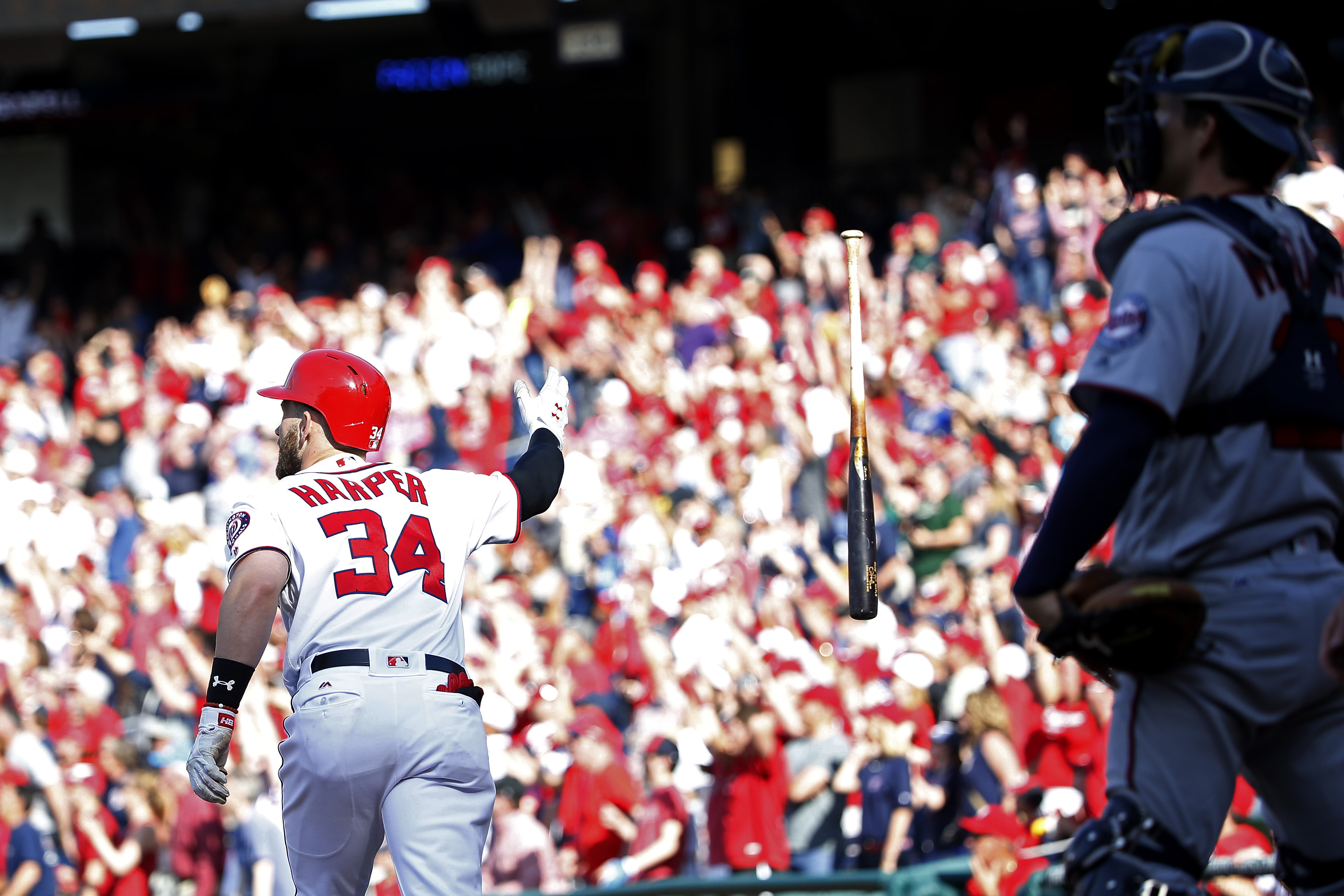 "I don't know," he said. "You know something, I don't think these guys are even affected by what anybody says, to tell you the truth. I know I'm not. People pick who they want to pick. Most of the time they're wrong. Most of the time they have to pick somebody because that's their job. I don't read it. I don't think these guys read it. And it really doesn't matter, you've still got to go out and play the game and the only thing that matters is how [we] feel about ourselves.

"Part of my job is to let these guys be themselves, with some regimentation, but the main thing is just come prepared to play from the opening pitch to the last out of the game. I'm really enjoying these guys, I think they're enjoying each other. They're just playing baseball."