"Gio continues to be one of our best pitchers. He's getting better and better," Dusty Baker told reporters after Washington Nationals' lefty Gio Gonzalez held the New York Mets to one run in six-plus innings last night in the Nats' 7-1 win in Citi Field.

"Everybody loves velocity, but velocity with poor command is no good...You've got to have command and throw the ball where you want to throw it." -Dusty Baker on Gio Gonzalez vs the Mets

Gonzalez altered his mechanics some this Spring, under the guidance of new pitching coach Mike Maddux, with a focus on picking up his target earlier in his delivery, his fastball (two and four-seam) velocity is down a tick, but Dusty Baker is not concerned with Gonzalez's velo considering the results thus far.

"Everybody loves velocity, but velocity with poor command is no good," Baker told reporters last night, after Gonzalez's 6 ⅓-inning outing against the Mets, which saw him give up five hits, a walk and one earned run, working with a two-seam fastball that sat at an average of 90.7 mph and got up to 92 and a four-seamer that averaged 91.7 mph and got up to 93.2 according to Brooksbaseball.net.

According to Fangraphs.com's PITCHf/x data, Gonzalez's two-seamer has averaged 89.6 mph this season, down from a 91.8 mph career average and his four-seamer, which has averaged 90.0 mph, is down from 92.2 in his career.

"You've got to have command and throw the ball where you want to throw it," Baker continued, "and a lot of guys have velocity but if they don't throw it where they want to throw it, then they just turn it around.

"I don't really worry about velocity unless I look at the board up there and you see he's had a dramatic drop during the game. Either something is wrong or he's tired or something, so velocity, there's not much difference between 92 and 93 or 94, you know what I mean? He's throwing the ball good, good changeup, good breaking ball, good tempo."

Gonzalez's tempo was disturbed by a long top of the seventh, and ten pitches into the bottom of the inning, with the Nats up, 5-1, the Mets had the bases loaded after three singles, setting them up with an opportunity to tie it up with one swing.

Gonzalez told reporters he wasn't bothered by the long wait to get back on the mound.

"I wasn't even paying attention to that," he said.

"I was just, you know, two pitches to [Yoenis] Cespedes and he got a base hit, get the next guy a ground ball, I was trying to make the pitches quick, but they were putting the ball in play and I'll take some singles instead of hitting it over the wall. So, especially in that inning as far as that -- that was a big inning for us."

"What he's been doing is remarkable, incredible to see him go out there and, 'Give me the ball.' That's his attitude every time." -Gio Gonzalez on the work Felipe Rivero has done

"I told [catcher Jose Lobaton] to try to make sure he gets some extra warm-up pitches if he can," Baker said, sharing his advice to Gonzalez before he went out for the seventh, "but he said his ritual is not to get any more than -- I guess he's super-honest and doesn't take any more, but I told him next time you try to get some more if you can, especially when you're sitting around for a long, long time."

Gonzalez was lifted in favor of left-handed reliever Felipe Rivero, who got a force at home on a weak grounder to the mound by Kevin Plawecki and a groundout to first by Michael Conforto to get the Nationals out of the jam.

Gonzalez was impressed with Rivero's work on the mound.

"He's one of those guys that have taken that role and decided to say he's going to use it to his advantage. What he's been doing is remarkable, incredible to see him go out there and, 'Give me the ball.' That's his attitude every time he goes out there and pitches."

Rivero's success, Baker said, is all about location, even though he's struggled to some extent in recent weeks. 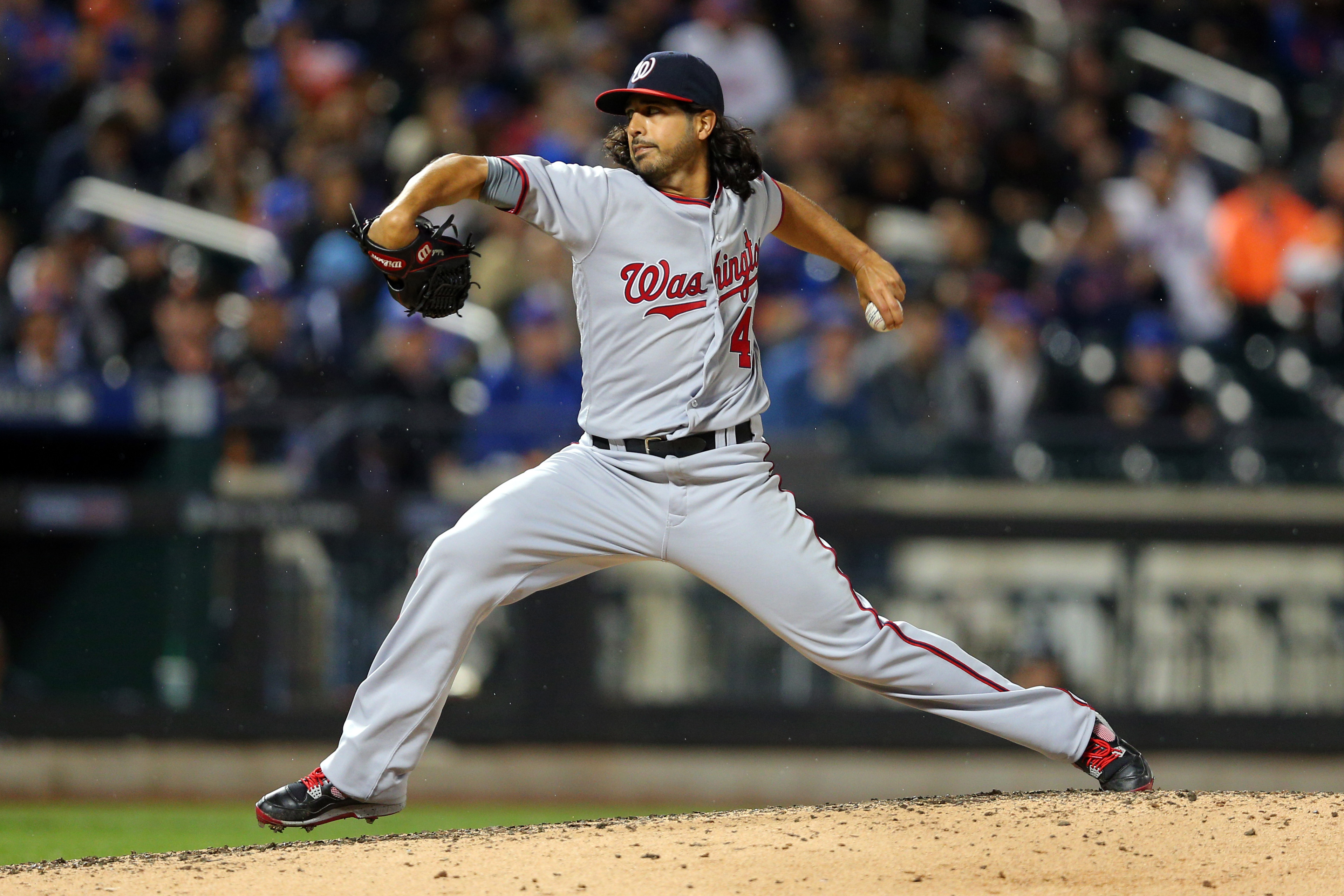 "Felipe Rivers, the catcher, Jose Lobaton, and then Sammy Solis, Shawn Kelley, that's what it is about Citi Field," Gonzalez said.

"These guys did a great job and then I can't complain with the offense, they were scoring some runs, so the credit goes to them, they were the ones that are helping me out.

"Big situation in the seventh and Felipe came through, big opportunity for him."

Washington's win set them up with a big opportunity to take the series with the Mets tonight in the rubber match of the three-game set. Stephen Strasburg vs Matt Harvey at 7:10 PM EDT.