The Chicago Cubs had an answer for everything the Washington Nationals did today. The NL Central leaders won their sixth straight overall and their third straight over the Nats in Wrigley FIeld. The 8-5 win today set them up with a change to sweep tomorrow.

Washington scored the first run of the game in the top of the third, but Chicago answered right back in the bottom of the inning, tying it up at 1-1 after three.

Kris Bryant put the Cubs ahead in the fourth with a solo blast on an 0-2 fastball from Gio Gonzalez, but the Nationals battled back to tie it and take the lead with two runs in the fifth and then added another in the sixth, 4-3.

"I’m not going to run into the wall, plain and simple. Got as close as I could and put my glove out and (the ball) nicked off it. Things happen. I’m not going to do it again - run into a wall..." -Bryce Harper on pulling up short on fly to right that scored two

In the bottom of the sixth, however, the Cubs rallied with Addison Russell sending a two-out RBI single to center off of Gonzalez and Ryan Kalish sending a soft liner by a diving Danny Espinosa at short for a two-run single off lefty reliever Sammy Solis that put Chicago ahead, 5-4.

Ryan Zimmerman brought a run in with a groundout in the seventh to tie it up at 5-5, but Russell sent a fly to right field off Shawn Kelley that Bryce Harper tracked but couldn't catch when he ran out of real estate and pulled up short of the wall that juts out into right field.

Two runs scored on the play and the Cubs added another in the eighth in what ended up an 8-5 win. It was the Cubs' sixth straight win overall and their third over the Nationals.

"I’m not going to run into the wall, plain and simple," Harper told reporters including MASN's Mark Zuckerman, when asked about pulling up short on Russell's double.

"Got as close as I could and put my glove out and (the ball) nicked off it. Things happen. I’m not going to do it again - run into a wall - and I’m not playing for another year and not feeling healthy. I’d rather be in the lineup every day. That’s just not going to happen."

Nats' skipper Dusty Baker said there was nothing Harper could do, "... outside of running into that wall and hurting yourself."

"They've got padding out there, but that pad doesn't help. Anybody that's ever ran into that wall... that ball blew twenty feet, you know what I mean. The ball wasn't bouncing our way. They got that big jam shot from Kalish, everything was just out of our reach. I mean, we didn't help ourselves."

Baker was asked about sticking with Gonzalez in the sixth, after he gave up one and two-out singles by Anthony Rizzo and Jorge Soler, respectively, that put the tying run on third before Russell's RBI single ended the left-hander's outing.

"His pitch count had gotten high and they had a couple guys over there that hadn't had any success against left-handers. I think that was Addison Russell's first hit all year against a left-hander," Baker explained.

It was, Russell was 0 for 14 against left-handers before the hit.

"He's been much better against right-handers, and boy, that was tough to take."

The Cubs took the lead in the sixth, and Sammy Solis, who finished out the inning, came back in the seventh, giving up a one-out walk to Bryant, a ground-rule double to left by Rizzo and a base-loading walk to Ben Zobrist before the Russell double down the line in right that Harper couldn't reach. 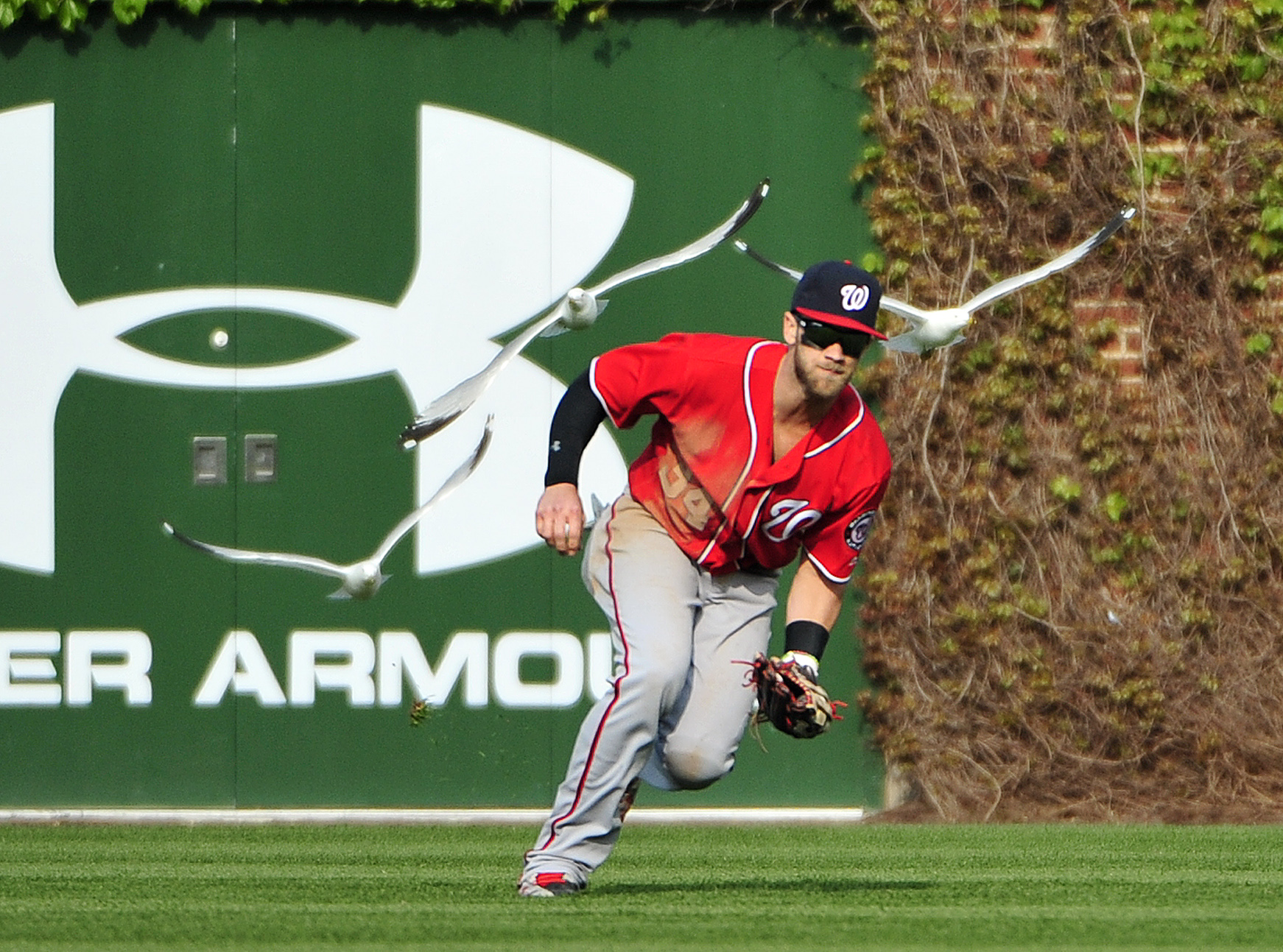 "Rizzo is hitting .111 against left-handers and he hits one inside the line and it bounces into the stands," Baker said.

"Like I said, I can't repeat it anymore, the ball just didn't bounce our way."

It doesn't figure to get any better. Jake Arrieta (6-0, 0.84 ERA) starts the series finale this afternoon.