Dusty Baker didn't take the four-game sweep at the hands of the Chicago Cubs well, and Washington's skipper said then that he was looking forward to meeting the National League's best in Nationals Park. "We'll see them at our house," Baker said. It's time.

Share All sharing options for: Nationals sweep Phillies with walk-off win heading into big series with Cubs in D.C.

Sunday's win in the series finale with the Phillies left the Washington Nationals 7-4 against Philadelphia this season, and the Nationals had wins in 10 of their last 13 overall after walking off on their divisional rivals.

After their win in the second game of three with the Phillies in D.C. on Saturday, Dusty Baker talked to reporters about the tough stretch ahead for the Nats, who play three with the Cubs over the next three days before they head out on the road to take on the San Diego Padres and Los Angeles Dodgers.

"What I take away from this series is that we'll see them at our house," Baker said, "and that I'd love to come back here in the playoffs." -Dusty Baker after getting swept by the Cubs in Wrigley

"It is a big stretch because we're only home like ten days this month, you know," Baker said.

"We're on the road twenty days this month, that's a lot, we haven't played the West yet at all. You want to get some momentum before you go there. We've got one more game here, then we've got the Cubs coming in, and that West Coast trip, you don't want to start looking ahead, because we've got the Cubs coming in, but the West Coast trip has been a nemesis to a lot of teams.

"We wrestled with 10 for a while, then we got to 12, now we're pushing on 15, hopefully and next stop hopefully is 20 and who knows where it goes from there."

The Nationals are 39-24 overall, 15 games over .500 after sweeping the three-game set with the Phillies. The 43-18 Cubs come to D.C. with the best record in the National League.

Chicago and Washington are 1-2 in the NL in run differential too, with the Cubs at +162 and the Nationals at +76. It's a great test of where the Nats are at right now after they've beaten up on some struggling teams in the last few weeks.

After the Nationals were swept in their four-game set with the Cubs last month in Wrigley Field, Baker talked about what he took away from the matchup with the league leaders.

"What I take away from this series is that we'll see them at our house," Baker said, "and that I'd love to come back here in the playoffs.

"Keep the ball out of the air, we don't need a home run, we just need a base hit and that's what Jayson did. That was a huge win for us." -Dusty Baker on watching Jayson Werth beat the Phillies with a walk-off hit

"They got everything they needed in this series and it's hard to keep just getting whatever you want, whatever you need."

Danny Espinosa, who homered earlier in the game, connecting for his 8th home run in the last 15 games, battled closer Jeanmar Gomez before singling to left and Clint Robinson took a two-out walk to load the bases in front of Werth.

"As a kid you always want that last at bat, because you can walk off and you're just glad it didn't happen on the road," Baker said.

His thoughts after Papelbon gave up the go-ahead home run in the top of the inning to put the Phillies up, 4-3?

"My emotions were, 'Okay, Pap, we gave up one, let's not give up any more. Cause we can come back and it's a lot easier to get one than it is to get two to tie.' And, boy, I was like, 'Okay, we got out of this inning, now let's try to figure out a way to get out of this problem that we have and then our pinch hitters came through, big time, that was a huge hustle play by Harp, and then okay, we've got action and then Danny Espinosa had a huge at bat.

"That was huge and then I sent Ben Revere up there because Ben, most of the time, doesn't hit into a double play.

"If I had sent Robinson up there, he's a double play man if he hits it on the ground, and then okay, now, you start thinking here comes Robinson and then Robinson can win the game and then after that, when he walked Robinson, I knew we had action with Jayson, because Jayson, no matter how he's playing he's been a clutch man all these years and clutch men know how to come through and clutch men love to be in that situation and then when he got 2-2, we were all saying, 'Base hit up the middle. Base hit up the middle.' Because that's the biggest hole in the park. 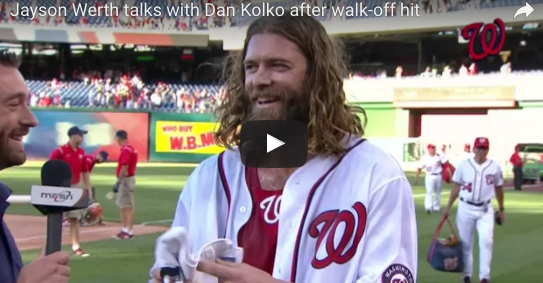 "Keep the ball out of the air, we don't need a home run, we just need a base hit and that's what Jayson did. That was a huge win for us."

Up next is a big series with the Cubs.

Max Scherzer, who gave up seven hits, four of them home runs and seven runs total in five innings in Wrigley, goes for his third straight win after beating the Philllies and Chicago White Sox in his last two starts.

Scherzer and the Nationals could use some redemption after what the Cubs did to them last time they met. The three-game set starts at 7:05 PM EDT in D.C.