San Diego Padres' 2011 1st Round pick Joe Ross took the mound in Petco Park last night as a member of the Washington Nationals' rotation and he beat the team that drafted him 25th overall out of Oakland, CA's Bishop O'Dowd High School.

Share All sharing options for: Joe Ross pitches in Petco Park for the first time in Nationals' 7-5 win over Padres

Washington's win in the series opener in San Diego was their sixth in the last seven, ninth in the last eleven and the thirteenth in their last seventeen games, leaving the Nationals 42-25 overall on the year.

Heading into the series with the Padres, who were 27-41 after Thursday's loss, Dusty Baker was clear that he wasn't taking his opponent lightly.

"This is a new challenge. This is a challenge kind of like when we were in Cincinnati," Baker explained as he went over the Padres' lineup before the first game of four.

"These are dangerous teams. Anybody on this piece of paper is a professional that we're playing against and they were the best from where they came from at some point in time..." -Dusty Baker on the getting to know the Padres

"You know they want to beat you. We had to do a bunch of studying, because a bunch of people here are guys that we don't know. And those are the dangerous guys.

"Those guys... and September call-ups, that you're pitching to a guy and keep the ball down but he's a low-ball hitter and after he hits one out on you, now you know the next time, but he's beating you in the meantime.

"These are dangerous teams. Anybody on this piece of paper is a professional that we're playing against and they were the best from where they came from at some point in time in their life."

Joe Ross was once the best player where he came from, putting up a 0.83 ERA and 95 Ks (12.64 K/9) in 67 ⅔ innings during his senior year at Oakland, California's Bishop O'Dowd High School before was selected by the Padres with the 25th overall pick in the 2011 Draft.

He was subsequently traded to Washington (along with top infield prospect Trea Turner) in the eleven-player, three-team December 2014 deal that brought Wil Meyers to San Diego.

Ross pitched in the park he could one day have called home for the first time on Friday night, in his second career start against the Padres and his 13th start of the year for the Nationals.

He allowed six hits, two walks and three earned runs over six innings of work in what ended up a 7-5 win, with a Jon Jay double and a Matt Kemp single in the first putting the Padres up 1-0 early.

Jay singled to right to drive in a run in the bottom of the fifth, making it 5-2 Nationals and Derek Norris homered on a low line drive to left in the sixth for the final run Ross allowed.

"He was good. He was very good," Baker told reporters after the game. "He just made a couple mistakes."

Baker sent his right-hander out for the seventh, but replaced him on the mound with Oliver Perez when the Padres hit for reliever Carlos Villanueva with Alexi Amarista.

Perez walked the first batter he faced, which ended up being Christian Bethancourt when the Padres' burned Amarista for a favorable matchup, and Jay doubled in the next at bat to put runners on second and third with no one out.

Both runners scored on groundouts with Blake Treinen on for the Nationals, making it a 7-5 game after seven innings in Petco Park.

"Joe's had a little trouble the third time through the order," Baker explained when asked about the decision to take Ross out after six.

"He's also had a little trouble against left-handers. We had hoped that he would get us through the seventh, but he had a high pitch count number that took him to [95] and what was next, 105?

"We didn't want to wait until he got into trouble." 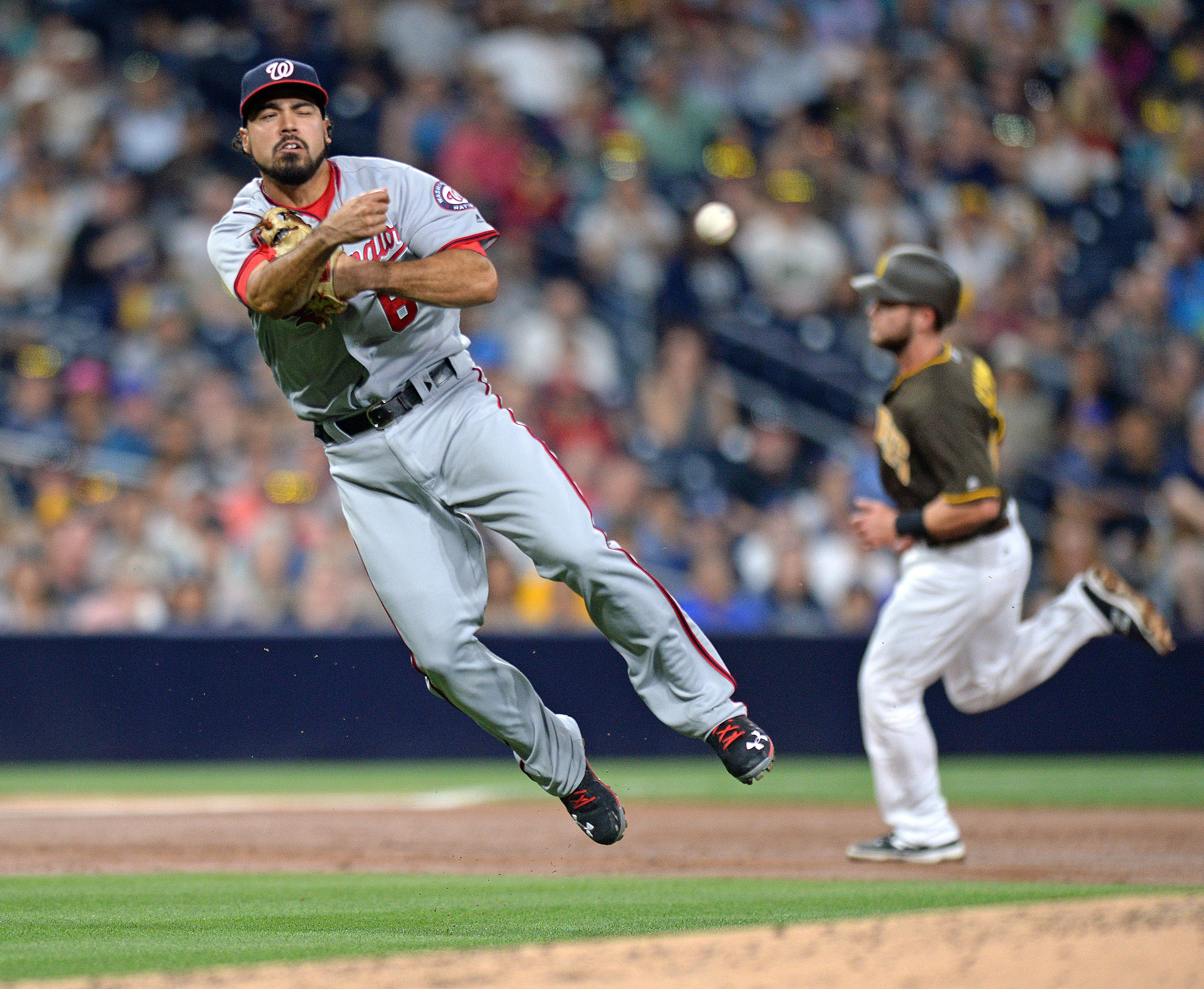 "It didn't work, but we have to really watch Joe, because his innings are building up. As you can notice, he has the least amount of innings of our starters.

"So we want to take him all the way through September and hopefully into October."

Nationals' second baseman Daniel Murphy, who was 2 for 4 with a two-run double and a home run in the win, liked what he saw from Ross on Friday night.

We talked about the Padres' uniforms, Ross in San Diego, Wil Myers and the Nationals' bullpen after last night's game: