Dusty Baker tried to warn the Nationals about the West Coast: "It's no joke going to the Coast."

Washington Nationals' skipper Dusty Baker warned everyone that West Coast trips can be trouble, and the Nationals finished up their swing through San Diego and Los Angeles with five straight losses. "It's no joke going to the Coast."

Share All sharing options for: Dusty Baker tried to warn the Nationals about the West Coast: "It's no joke going to the Coast."

Dusty Baker doesn't seem like the kind of guy who would tell you he "told you so", but the Washington Nationals' 67-year-old skipper did warn everyone about the dangers of West Coast road trips before the Nationals left the nation's capital for San Diego.

"The West Coast has always been tough on teams," Baker said.

"I've seen the West Coast destroy teams. But this is a pretty resilient team. Because you go to the Coast man, everybody has friends, relatives, a couple of fleas and some parasites on the West Coast, it's true.

"The West Coast has always been tough on teams. I've seen the West Coast destroy teams. But this is a pretty resilient team." -Dusty Baker on the dangers of the Nationals' West Coast swing

After the Nationals dropped two straight to end their four-game set with the Padres and three in a row to the Dodgers in Los Angeles, Baker reminded everyone that he'd warned them.

Last night's 4-3 loss in Dodger Stadium was a particularly rough one, with Michael A. Taylor (who was 0 for 5 with 5 Ks at the plate) misplaying a ninth-inning grounder to center into a little league walk-off home run.

With Dodgers' outfielder Howie Kendrick on first following a one-out single, Yasiel Puig shot a grounder back through the middle of the infield. Taylor charged it, looking to keep Kendrick at second, but came up empty with the ball rolling under his glove and all the way to the warning track as Kendrick and then Puig came around.

With the way it ended, was it a particularly devastating loss?

"Well, they're all devastating at this point," Baker told reporters.

"And this is a test. Nobody said it was going to be easy. That's why you try to build as many games above .500 as you can." -Dusty Baker on the Nationals' five-game losing streak

"Every loss on this road trip has been devastating, cause we've had the lead in three or four of the games going into the late innings and Michael was trying to come in and stop Howie Kendrick from going to third. Every outfielder has done that, when you look up prematurely and don't watch the ball into your glove. That's happened to us all.

"We had some opportunities to blow the game open, this sounds like a broken record, but we're keeping the games close.

"That was a tough one, because we got out of some jams, we got some big hits, especially the hit by Ramos and like I said, we had action on scoring more than three runs."

Wilson Ramos hit a solo home run in the eighth to put the Nationals ahead, 3-2, and the Nats loaded the bases in front of Bryce Harper in the top of the ninth before Harper grounded out to first to end the threat.

On the night, the Nationals were 2 for 9 with runners in scoring position and nine runners left on base in what ended up a one-run loss.

It was the Nationals' fifth straight, a new season-high losing streak. Baker was asked how his team will handle it and how they'll bounce back?

Dodgers walk off on Nationals, 4-3 final in LA 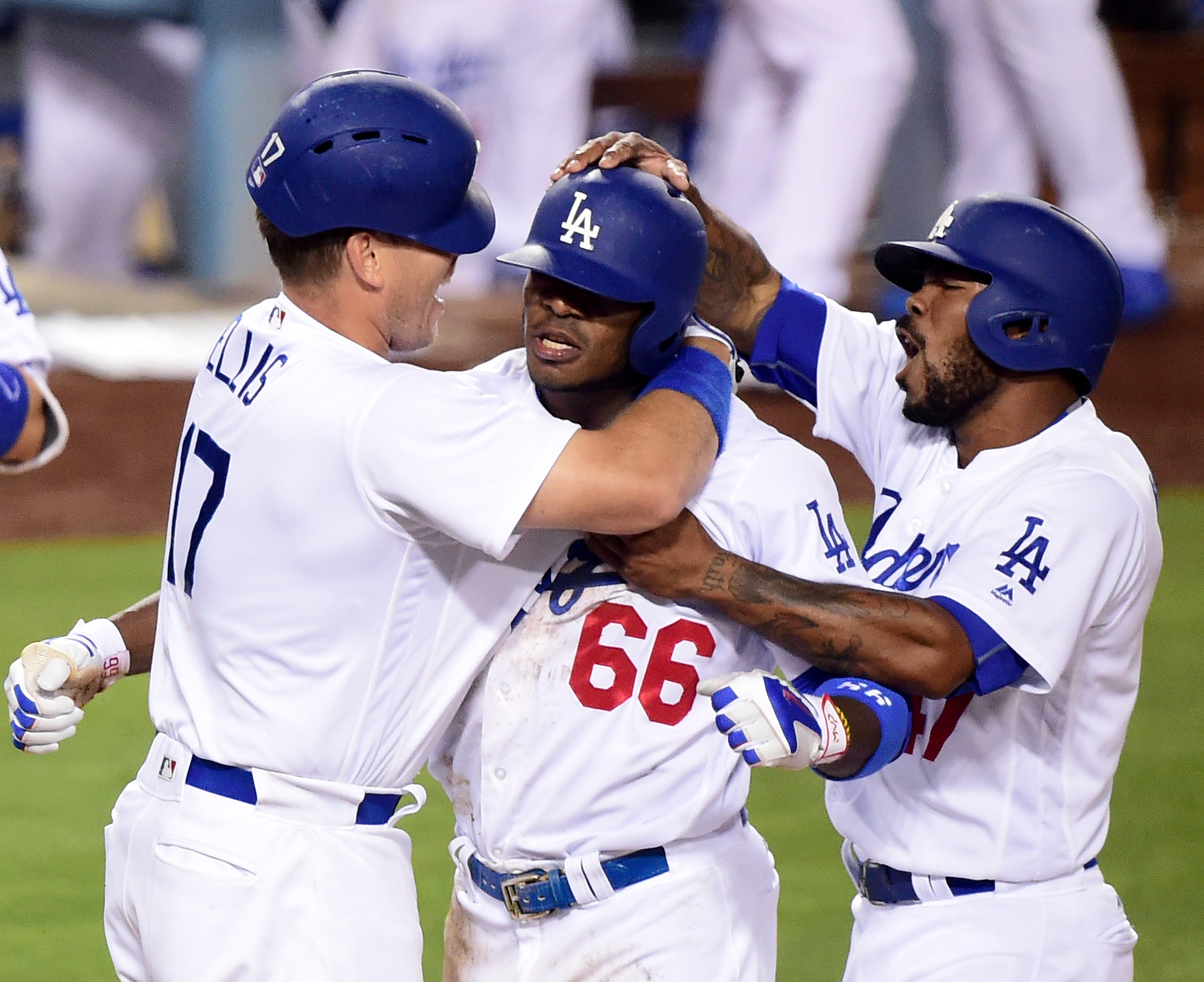 "They're very resilient," he said. "I mean, very resilient. And this is a test. Nobody said it was going to be easy. That's why you try to build as many games above .500 as you can.

"Because you're going to go through -- every team is going to go through a period like this. What if we were .500 and had a period like this? And so we've still got the lead and we've got to forget about this one. It really helps I think that we've got an off day tomorrow and start all over again, because this is a very tough stretch. I told you when we left home that this West Coast trip has historically been tough on teams."