Milwaukee Brewers' skipper Craig Counsell knew it wasn't necessarily a break to get Tanner Roark in Sunday's series finale instead of Stephen Strasburg. Roark shut the Brewers out over seven innings in the Washington Nationals' first win in eight games.

"This isn't a break as far as I'm concerned," Counsell said, as quoted by Milwaukee Journal-Sentinel writer Todd Rosiak.

"I felt good enough to go out there and do it. We had the off day so that I was on five days rest anyway, so all good." -Tanner Roark on stepping in when Stephen Strasburg went on DL

"[Roark's] pretty good. He's a challenge. He's under the radar because [Max] Scherzer and Stephen Strasburg are big names.

"But this guy is a good starting pitcher."

Strasburg landed on the 15-Day DL (retroactive to 6/16/16) after he was scratched from his second straight start with an upper back/rib issue caused by an injury suffered while he was working out in preparation for last Monday night's scheduled start against Clayton Kershaw and the Los Angeles Dodgers.

Dusty Baker explained that the Nationals couldn't wait to see if Strasburg was going to be able to pitch.

"We figure this was the time to DL him. We can backdate it 10 days. Who knows, he might be ready in five or six days."

Roark stepped in and tossed seven scoreless innings on 95 pitches, giving up seven hits and a walk in what ended up a 3-2 win that snapped the Nationals' streak of seven straight losses.

"He's got a quality fastball and he's got offspeed stuff that he uses that he was very good with today and able to throw at any time..." -Craig Counsell on Nationals' starter Tanner Roark

He did what he did on the mound a day after he'd thrown a 38-pitch bullpen session in preparation for what would have been his next start on Monday before the Nationals placed Strasburg on the Disabled List.

Roark said after the game that he was comfortable taking the start on short notice since it wasn't really on short rest.

"I told them I would do it," he said. "I felt good enough to go out there and do it. We had the off day so that I was on five days rest anyway, so all good."

He had leadoff hitters reach base in five of his seven innings, but worked his way out of trouble and said he felt fine when he got on the mound.

"I mean, the warm-up pitches kind of stunk," Roark said, "but after that, once I get out there and get it loose again, I felt fine and felt good and just everything still felt great throughout the whole entire game."

"He's got a quality fastball and he's got offspeed stuff that he uses that he was very good with today and able to throw at any time and it's a tough combination for hitters."

Dusty Baker and Roark talked about how big the win was for the Nationals, who finished their ten-game, three-city road trip 3-7, bringing an ended to their losing streak before the start of their ten-game homestand.

Roark steps in, lead Nats to 3-2 win over Brewers 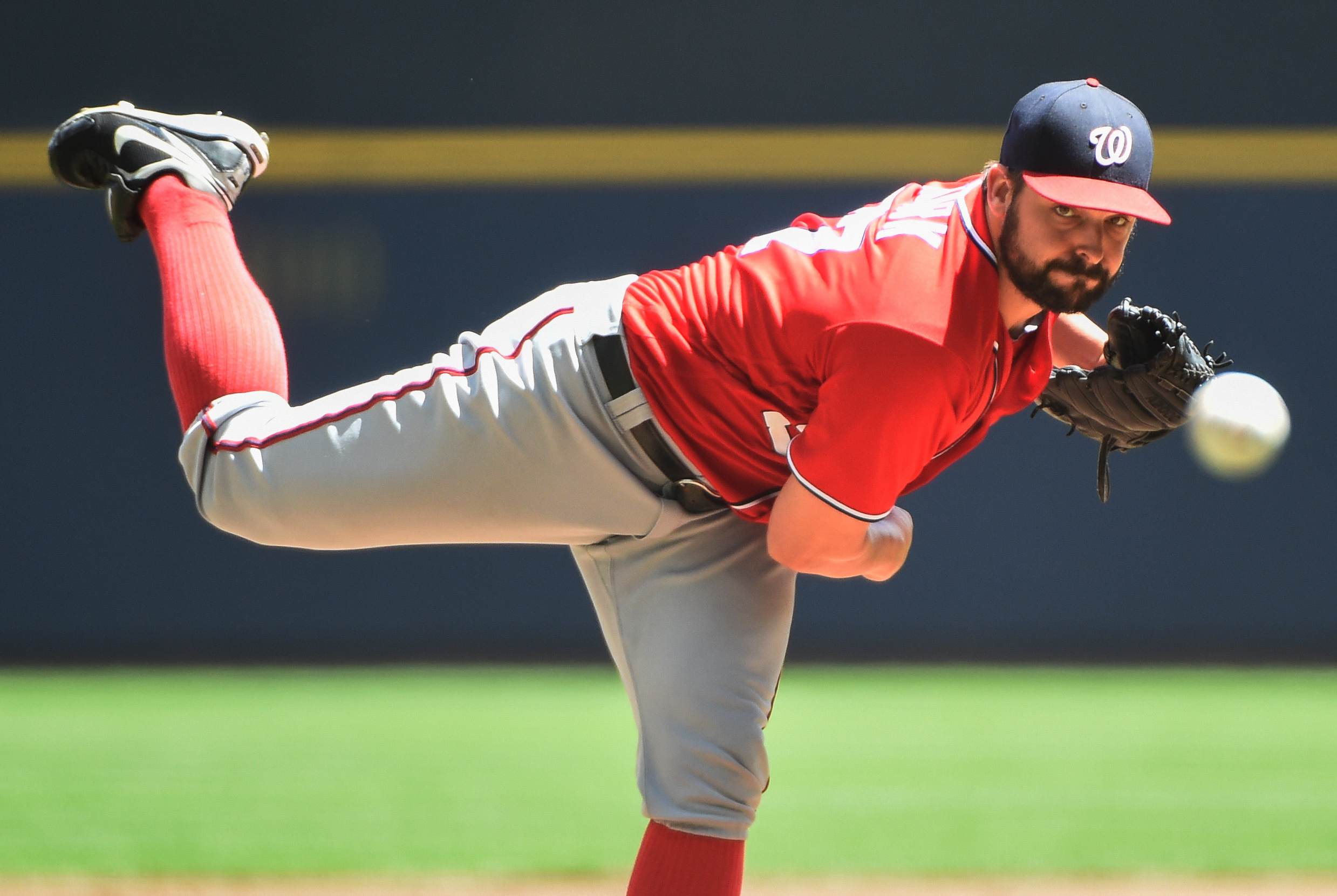 "That’s the biggest getaway victory we’ve had this year, and it wasn’t easy," Baker told reporters, including MASN's Pete Kerzel.

"Very big," Roark said of the win. "Happy flight. Everyone is happy. It's good to hear our celebration music, you know, so it's good morale going back home for this series coming up."

Washington starts a three-game set with the New York Mets tonight in the nation's capital at 7:05 PM EDT with Joe Ross on the mound against Noah Syndergaard.

• We talked about Roark's outing, Strasburg landing on the DL and more on Nats Nightly after the Nationals' win: