Lucas Giolito's MLB debut was delayed and shortened by rain in the nation's capital, but the Washington Nationals' top pitching prospect threw 4.0 scoreless against the New York Mets while he was on the mound in Nationals Park.

Share All sharing options for: Nationals' skipper Dusty Baker's advice for Lucas Giolito before MLB debut: "Be nervous, but don't be scared."

Dusty Baker was asked before Tuesday night's game if he had any advice for Lucas Giolito, who was making his MLB debut four years after the Washington Nationals selected him with the 16th overall pick of the 2012 Draft.

"The same advice Hank Aaron gave me," Baker said. "'Be nervous, but don't be scared.' That's the best advice I got, and above all, like Ted Williams says, 'Above all, be natural.'"

Baker got a brief look at the pitcher considered the best right-handed prospect in baseball this Spring, and the 67-year-old skipper liked what he saw from the 21-year-old starter.

"The same advice Hank Aaron gave me, 'Be nervous, but don't be scared.' That's the best advice I got, and above all, like Ted Williams says, 'Above all, be natural.'" -Dusty Baker on advice he offered Lucas Giolito

"What stood out to me is he had a very quick arm," Baker told reporters this afternoon.

"Some guys it just explodes at you. He has a pleasant demeanor off the field and he seems to be a warrior in the time that we've seen him on the mound, which is how you want him to be and he displayed good control in Spring Training."

Before he could make his debut tonight against the New York Mets, Giolito had to wait out a fifty-five minute rain delay, but he took the mound to the second of two ovations he received from the crowd in the nation's capital, who also cheered his walk in from the bullpen, and his major league career started with a scoreless, 14-pitch opening frame in which he worked around a leadoff single by Curtis Granderson.

Nine-pitch frames in the second and nine more in a quick third left the right-hander at 32 pitches total after three scoreless.

He worked predominantly with his fastball, which sat 94-96, mixing in his 12-to-6 curve on occasion, which came in on average about ten miles an hour slower.

He worked around a leadoff walk to Yoenis Cespedes in a 13-pitch fourth that left him 45 pitches, but with the Nats up in the bottom of the inning, the rain returned, leading to another delay.

This one lasted for an hour and twenty-five minutes, ending Giolito's debut.

Washington was ahead 1-0 at that point, and the Nationals took a 3-0 lead when Bryce Harper hit his 16th home run of the season and the first home run by a lefty off Mets' left-hander Jerry Blevins since 2013, out to right in the bottom of the fifth. Wilson Ramos hit a two-run double to center in the seventh to make it 5-0 Nationals. That's how it ended.

"I never saw rain in the forecast at all. I thought it would be 72, sunny, all that stuff, that's how I dreamt it, but I'll take what I can get. An MLB debut is an MLB debut and I'm glad I pitched well." -Lucas Giolito on not imaging a rain-delayed and shortened debut

"He was very good," Baker told reporters, when asked to assess Giolito's outing.

"We were hoping that that rain would subside, but it didn't. He showed good control. He got out of whack a little bit there, then he found it back. He had a good fastball, which we knew, and he threw some outstanding breaking balls and a few changeups."

Baker said that as the second delay dragged on, it was clear that Giolito wouldn't go back out to the mound.

"He threw a couple turns underneath and when it got to about 45 minutes to an hour, then we decided that was enough and it wasn't worth risking it," he explained.

Overall, however, he said, Giolito's debut was a success.

"The guys responded to him, the fans responded well to him and it was a good day overall."

A rain delayed and shortened debut wasn't exactly how Giolito imagined it when he thought about one day making his first start in the majors.

"Not once, I never saw rain in the forecast at all," he laughed. "I thought it would be 72, sunny, all that stuff, that's how I dreamt it, but I'll take what I can get. An MLB debut is an MLB debut and I'm glad I pitched well."

Starting an hour late led to some anxiousness according to Baker.

"It was tough on him, cause he kept coming in my office wondering when the game is going to start," Baker said, "and in your first start that's nerve-wracking, cause you have different emotional swings. They said, 'Okay, we're going to go in 45 minutes,' and then, 'Okay, it's an hour,' and then he'd come in and say, 'Are we going to start on time?'

"And we thought we were, and so it's an emotional swing when you turn it on, turn it off, turn it on, so I'm just glad that we got to see him pitch."

"Dusty told me, 'You can be anxious, you can be nervous, just don't be scared. You belong here.'" -Lucas Giolito on advice from Nats' skipper Dusty Baker

"I was all right," Giolito said.

"I was a little anxious to get out there. I went out a little bit earlier than I usually would for a start just because I wanted to get out there after waiting and kind of sitting here. I was already warmed up and everything, but ended up being fun."

Asked when he realized that he was, in fact, making his major league debut, Giolito said it was when he first took the field to prepare for his start.

"When I was stretching in the outfield and starting to play catch I was like, 'Wow, this is a big league game, I'm pitching. I'm starting against the Mets and that's kind of where it hit me and it was all business from there, I guess like the first pitch of the game was a little weird, but after that it felt like any other game I've ever played."

While he's known for having the power fastball that was on display and the curveball he was able to throw for strikes, Giolito generated weak contact, including six ground ball outs.

"That means he was throwing not down the heart of the plate," Baker said. "He was demonstrating control and he was off the end and he wasn't afraid to use his defense. If you throw strikes with our defense, you've got a great chance of getting outs, especially if you keep the ball in the ballpark, which he did."

Giolito talked about the fan reaction before and during the game and what it was like to be on a major league mound for the first time.

"When I'm pitching I kind of tune it out," he said.

Nationals 5-0 over Mets: Giolito debuts with strong outing in D.C. 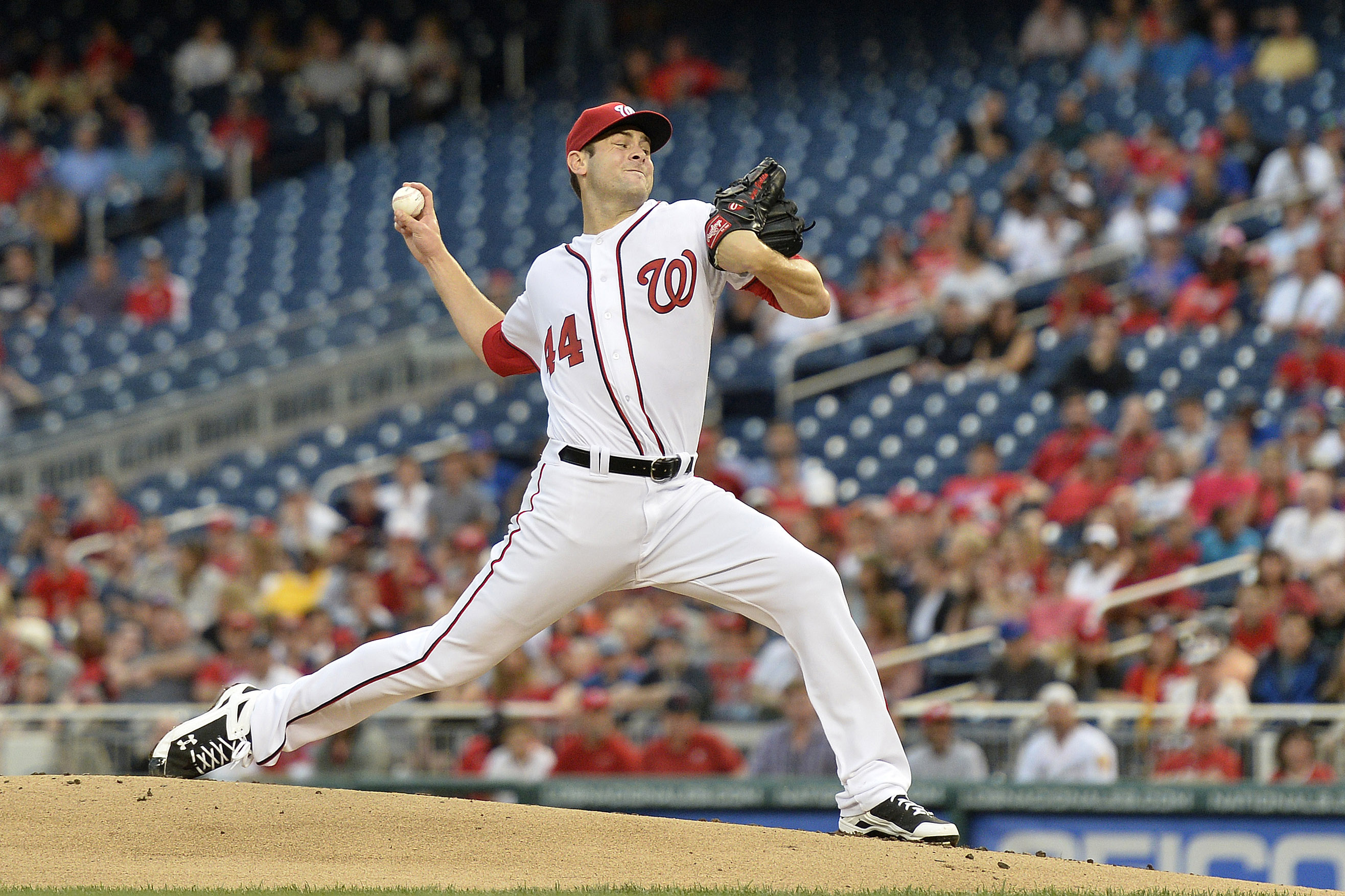 Giolito said he took the time he had to soak in everything he could, including advice from his fellow starters in the Nats' rotation.

Asked if there was any one thing his teammates or manager told him that stuck out, Giolito said it was hard to say, but he did recall Baker's words.

"Dusty told me, 'You can be anxious, you can be nervous, just don't be scared. You belong here.' And that's just what I tried to prove."