Stephen Strasburg collected his 1,000th career strikeout on the 9th of his 10 Ks this afternoon, but he gave up two home runs and the Nationals' starter left the game against the Reds in Great American Ball Park with a cramp in his right calf.

Stephen Strasburg is still undefeated in 2016, but the Washington Nationals are no longer unbeaten in their 27-year-old right-hander's starts.

Before this afternoon, the Nationals were 11-0 in the '09 No. 1 overall pick's outings this season, but they dropped a 6-3 decision to the Cincinnati Reds in Great American Ball Park.

"He was kind of short-legging it, and you could sort of see it. You could kind of see him grabbing it, rubbing it, so it was time to go..." -Dusty Baker on Stephen Strasburg's calf cramp

Strasburg left the game in the sixth, when a cramp in his right calf forced him from the mound, after the first of two rain delays, a walk to Zack Cozart, a two-out run home run by Joey Votto, which put the Reds up 3-2, and a one-out single by Jay Bruce.

"It was in his calf," Dusty Baker told reporters after the loss.

"He had a cramp in his calf. He says he's had it before, you know when he gets dehyrated a little bit. And so we're just glad that it's not a calf strain or a calf pull. Just think it's a cramp. They were working on him in the training room."

Baker and the Nationals' trainer visited the mound when Strasburg first experienced the cramping in an at bat against Reds' infielder Brandon Phillips, and left him in the game for another at bat, but the righty showed signs it was still an issue.

"He was kind of short-legging it," Baker explained, "and you could sort of see it. And so it was kind of self-explanatory.

"You could kind of see him grabbing it, rubbing it, so it was time to go. I think he had 90 pitches, he was close to his limit anyway, so it was just time to take him out."

"I felt it on -- I don't remember which pitch it was to Phillips," Strasburg told reporters, "but it was just like one where it was kind of like after I threw it it kind of grabbed at me and then I was like testing it, walking around behind the mound when Bruce was up, and as I was testing it, it kind of locked up on me again, but I did everything I could to get through that inning, it just didn't work out that way."

Strasburg surrendered three runs total, on a solo home run by Bruce in the second and the two-run blast by Votto in the bottom of the sixth, struck out 10 of the 22 batters he faced, collecting his 1,000th career strikeout along the way, and was done for the day after 5 ⅓ innings.

Bruce hit a 2-1 change out to left-center field. Votto sent a 2-1 curve out to right after Strasburg issued the leadoff walk to Cozart coming out of a twenty-one minute rain delay.

"I mean, these guys can hit it out of the park," Baker said when asked about the home runs Strasburg surrendered.

"It's not always anything wrong that he did. Sometimes you've got give the hitters credit for it.

Strasburg said he thought he fell behind in the count on some close pitches before giving up the Votto home run.

"I made some good pitches inside, I just wasn't getting the calls, so, it can be a challenge when you try to establish in and they don't have to honor it, so."

Neither Baker or Strasburg seemed concerned that the calf would be an issue going forward. 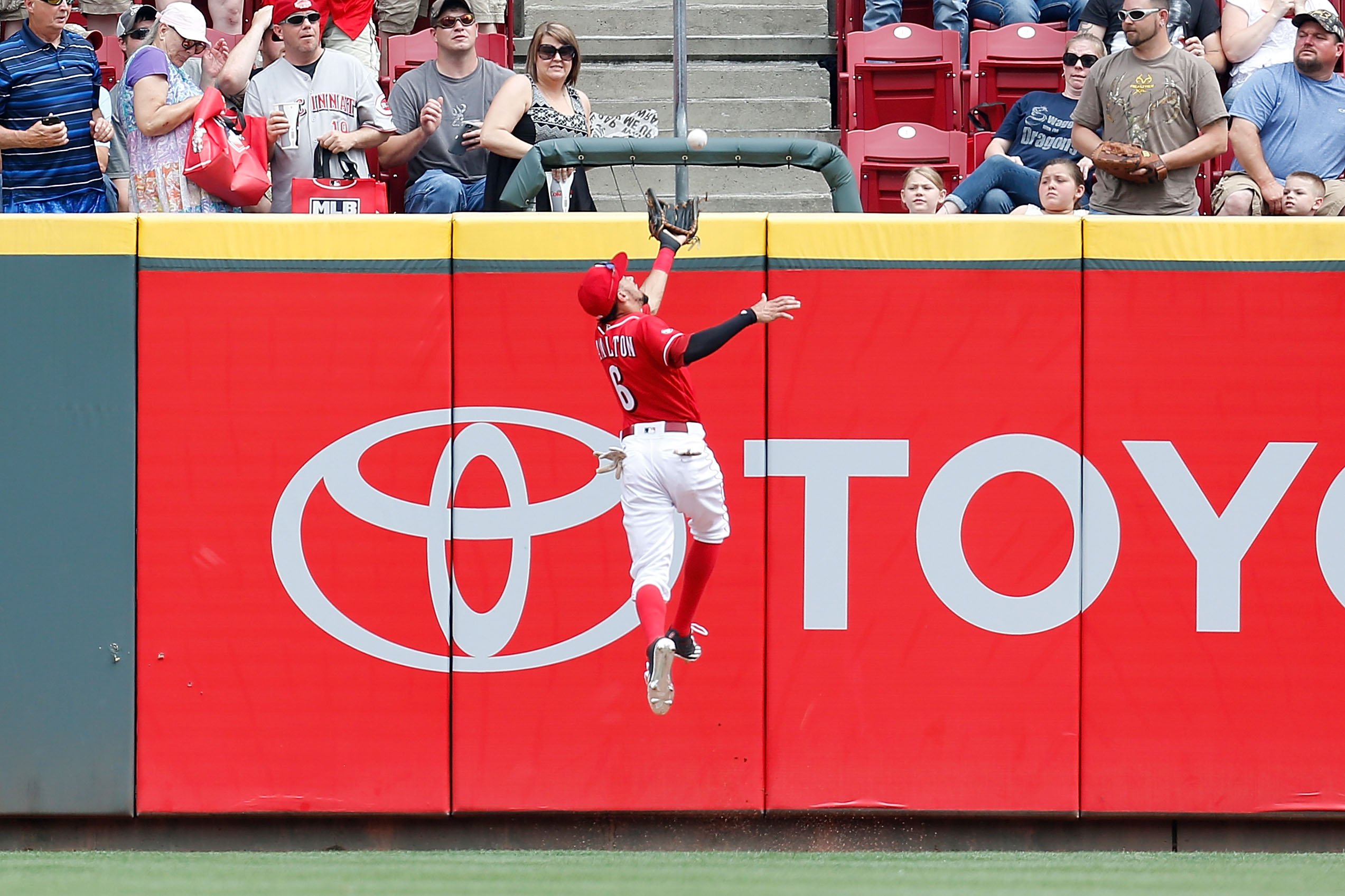 "I'm not a doctor," Baker said. "All I know is they were messaging it and they were trying to get the cramp out of there. If anybody ever had a cramp, it's quite painful and it kind of leaves when it wants to leave.

"He'll be all right. He'll be fine. He said he's had it before. We've just got to keep him hydrated in his next start."

"Tried to, I guess, stay hydrated," Strasburg explained. "Drinking a lot of water and stuff, knowing it was going to be a hot one. But it just kind of grabbed at me a little bit, but got some treatment on it and it feels fine."

"It's no different than getting a cramp anywhere, I mean, sometimes it happens."