Nationals' GM Mike Rizzo on Trea Turner: "When there is no need to rush a player to the big leagues... we shouldn't rush him."

Washington Nationals' GM Mike Rizzo talked to 106.7 the FAN in D.C.'s The Sports Junkies this morning about why the Nats brought top prospect Trea Turner up for three games before returning him to the team's top minor league affiliate.

Share All sharing options for: Nationals' GM Mike Rizzo on Trea Turner: "When there is no need to rush a player to the big leagues... we shouldn't rush him."

When he met with reporters yesterday in U.S. Cellular Field in Chicago for the first time since Washington's top infield prospect Trea Turner was returned to Triple-A Syracuse following a weekend with the Nationals in Cincinnati, Dusty Baker shared the message he had for Turner before he went back to the Nats' top minor league affiliate.

"All you’ve got to do is live and breathe and stay healthy, and the world’s going to be yours at some point in time."

At some point in time, but not right now...

"You don’t have to rush him," Baker added. "I’ve seen kids get rushed and get ruined. Everybody wants to rush these guys. Just go play. That’s the main thing. Go play and stay healthy. Let’s not rush things. It’ll take care of itself."

Nats' GM Mike Rizzo was asked about the decision-making process when it came to Turner in his weekly appearance on 106.7 the FAN in D.C.'s The Sports Junkies this morning and he went into more depth about the team's thinking in bringing Turner up for the weekend and what the plan is going forward.

"The plan going forward with Trea is he's one of our bright shining stars of the future and the future could be next year, it could be next week..." -Mike Rizzo on Trea Turner on 106.7 the FAN in D.C.'s The Sports Junkies

"It could be as needed and as he develops into a guy that we think is going to be a good consistent contributor for us at the big league level. As we saw in Spring Training and even in glimpses last year, he's extremely close to being a big league player, but I think we all have to take a step back and realize that last year was his first professional season out of college, his first full season and he has flown through the minor league system probably like a handful of players have in our history. [Stephen] Strasburg and [Bryce] Harper probably went as fast through the minor leagues, but Trea is a dynamic player and we're excited to see what he brings to the party down the road."

So why call him up, but only start him in one of the three games with the Reds in Great American Ball Park?

Turner was up to fill Ryan Zimmerman's roster spot while the veteran infielder was with his family for the birth of their second child.

He started on Friday, going 3 for 3 with a walk, and then came on as a pinch runner in the second game of three in Cincinnati.

"A lefty was pitching the first day, we were going to give Clint Robinson the reps against right-handers while Zim was down, so the first game was a lefty, we put him in there and he did everything we wanted him to do with that. Then the righties came and we kept the plan in place with Clint playing and you can't sit [Daniel Murphy] and [Danny Espinosa] has been picking the ball up just great for us.

"I guess the rationale for that was, that we're playing extremely well, we've got a very good synergy going, there's a good energy on the team and we like the team that we have right now and Dusty didn't want to mess with the chemistry of the club and the reps that the guys were getting."

So, Rizzo was asked, there's no rush and no desperation right now, so the Nationals don't need to bring Turner up right away?

"I think that I like where -- obviously Murph is going to play second when Zim is playing first and we like where Espinosa is defensively. 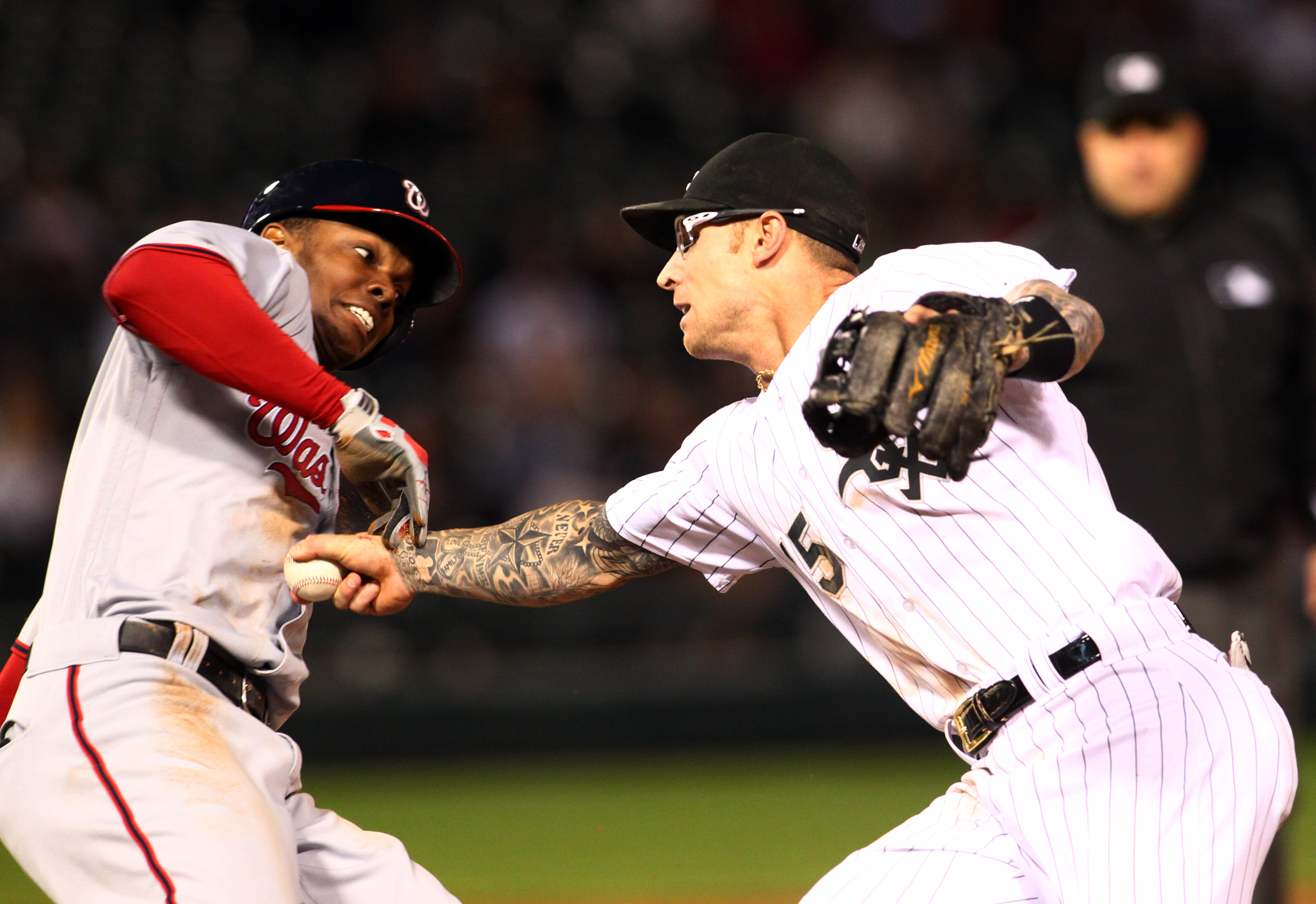 "This is a pitching and defensive-orientated team. Espi is an extremely gifted defender and he's playing well and he's getting some big hits. For a guy with a batting average where he's at, to drive in the amount of runs he has is pretty remarkable out of the eight-hole, so he's contributed to us offensively and he's been a huge factor for us defensively, but first and foremost and most importantly is, we need to develop the player right in the minor leagues.

"And that is the most important part for me. I'm an ex-farm director before I got here and it's all about developing players for the future and when there is no need to rush a player to the big leagues in his second full season of professional baseball out of college, we shouldn't rush him."