Washington Nationals' skipper Dusty Baker talked to reporters after last night's game about using five relievers in the eighth and ninth inning with closer Jonathan Papelbon unavailable. What will they do going forward?

Coming out of Thursday night’s nail-biter of a win, Washington Nationals’ skipper Dusty Baker told reporters that something had to change at the back end of the Nats’ bullpen.

Jonathan Papelbon struggled for the third straight outing and was lifted after putting two runners on with one out in a three-run game.

The Nationals held on for a 4-2 win, but the latest in a series of rough outings for the 35-year-old closer led to more speculation about what Washington would do with the ninth inning going forward.

"We've certainly got to figure something out here," Baker said.

"Man, I don't know," Baker told reporters. "You're asking me some questions and the game just ended. I don't know at this point."

He wasn’t offering much more when he spoke before the second game of four with the Giants on Friday night.

Asked if he’d settled on a ninth-inning option should the Nationals lead late in the second game of four, Baker said he’d thought about it, but he declined to share his thinking.

"We’ll see when we get there," Baker explained, as quoted by MASN’s Mark Zuckerman.

Sharing his plans, he said, served no purpose.

"All that’s going to do is just — if I do what I tell you now (and) then I change my mind, then: ‘How come you didn’t do that?’ or ‘I thought you said you were going to do that.’ So not wanting to make a story, we’ll just see when we get there."

Both Baker and GM Mike Rizzo addressed speculation about whether or not Papelbon was injured after his velocity dipped a few miles an hour below average:

"We’re going to check and see today," Baker said. "His velocity was down. We all noticed that. So I don’t have an answer."

While there was plenty of chatter out there about the Nationals’ rumored search for a back end of the bullpen arm, with the Nats mentioned in connection to relievers like the Pittsburgh Pirates’ Mark Melancon, the Kansas City Royals’ Wade Davis and the New York Yankees’ Andrew Miller, any temporary replacement for Papelbon on Friday was going to have to come from the major league roster.

Oliver Perez took the mound in the eighth, with the Nationals up, 4-1, and had the first two batters reach base on a bunt single and a blooper.

Blake Treinen came on to face Buster Posey with two on and no one out and walked him after starting up 0-2, and throwing four straight pitches in the dirt to load the bases with no one out.

Sammy Solis came on to face Brandon Crawford, who lined out to Ryan Zimmerman, who stepped on first... and threw to third... for an inning-ending triple play, which was the first in franchise history (2005-present), and reportedly the first 3-3-5 triple play in MLB history.

When they got to the bottom of the ninth inning, with the Nationals up, 4-1, Felipe Rivero got the ball.

Rivero retired the first two batters he faced before giving up a two-out single to left by Gregor Blanco. 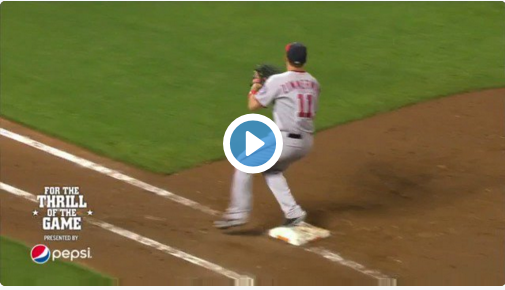 Baker went to the pen again for Shawn Kelley vs Trevor Brown. Brown singled to right to put runners on the corners with two out and newly-acquired Giants' infielder/pinch hitter Eduardo Nunez up, but Kelley struck him out to end the game.

Baker was asked after the win if they can keep using five relievers to get through two innings like they did tonight?

"I don't know," he said. "You guys always ask me some questions in the future. You've got to live now but be aware of the future and I don't know how long you can keep doing that, but hey, we're going to do it as long as we can and as long as we win the ballgame."

• We talked bullpen, triples plays and more on Nats Nightly: