It was one of those Septembers when it seemed that the summer would never end.
— Ian Fleming, On Her Majesty's Secret Service

For the first time since 2013, the Harrisburg Senators were in the Eastern League postseason.

I've known for months that the Senators were going to be in the postseason -- this year, the Eastern League went to a split season format (which, as best I can tell, made no difference at all to who the postseason teams were if a full-season format were used), and the Senators won the Western Division handily in the first half on the back of a very strong April -- but I wasn't sure I was going to be able to attend any postseason games. In the best of five format, the final three games were to be played in Harrisburg, but games four and five aren't guaranteed, and I knew I wouldn't be able to attend Friday night's game three due to publishing deadlines at work. So I contented myself with listening to the first three games on the radio, hoping that the Senators would win at least one game in the first three to force a game four that I could attend.

The thing is, I was not optimistic about that. While the Senators had a strong first half of the season, they were essentially a .500 team in the second half, and their opponents in the Western Division Championship Series -- the Bowie Baysox -- were exactly the opposite, sub-.500 in the first half, strong in the second half. The Senators team at the end of the season was not the team that bashed opponents left and right in April and May thanks to promotions out to Frenso and promotions from Potomac, while the Baysox team in September was the same Baysox team from August that clinched the second half in their final series in Richmond. (As an aside, I drove past the Diamond in Richmond on Labor Day, the final day of the season, and briefly thought about attending the Flying Squirrels/Baysox game since I was there. But I had no rooting interest and needed to get home, so I didn't.) When I was being honest with myself, the likely outcome was Bowie in four games, and a Bowie sweep in three was not out of the question.

The Senators lost game one, and when they won game two in Bowie on Thursday, the first thing I did Friday morning was to buy a ticket for Saturday's game four. My usual seat in the bleachers was open; indeed, only one ticket in section 303 had been sold, and based on the location I had a good idea who it was. I assumed it would be a 6 o'clock or 7 o'clock game; to my surprise it was a three o'clock game. Sunday's game five, I decided could wait for Saturday's outcome. 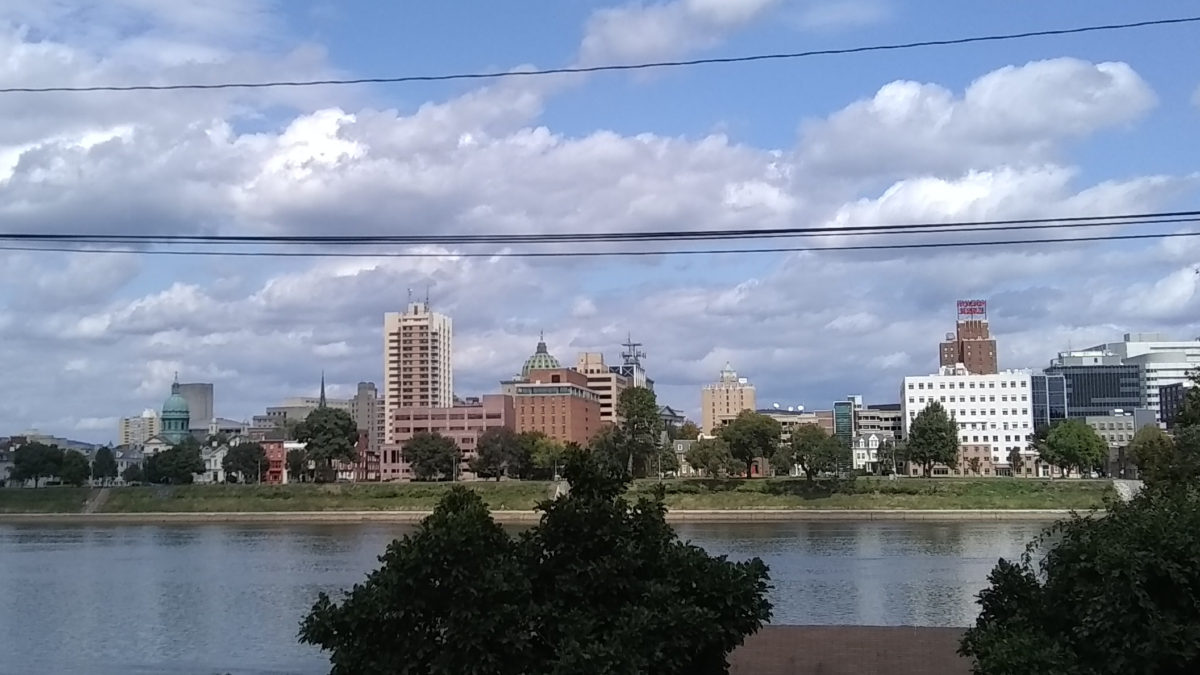 View of the Pennsylvania State Capitol, as seen from the concourse of FNB Field on City Island.

It could not have been a nicer day -- sunny, inviting clouds, mid-seventies. It was a "win or go home" game for the Senators -- they lost game three in Harrisburg Friday night -- and I would enjoy the day, whatever the outcome. 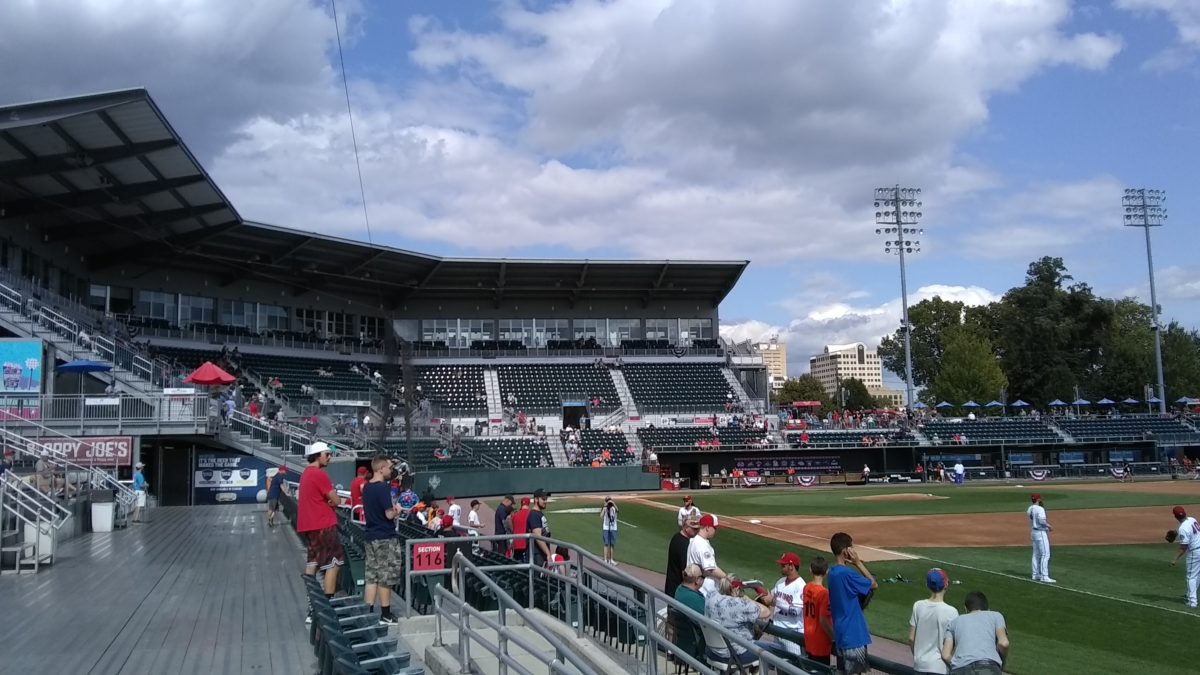 Unfortunately, not many Harrisburgarians made the same decision I did, to spend a pleasant Saturday afternoon on City Island. The crowd was sparse. I thought it would fill in as the game progressed, but it never did. There was a nice sized contingent of fans from the Baltimore and Bowie areas, wearing orange and black, and Orioles and Baysox gear.

Walking around the stadium before the game, I was struck by how different the park felt today. There were no groups at the roped-off tables on the concourse. No group in the party pavilion in the right field corner. No groups in the outfield party area. Some concession stands were closed. Regular staff faces from the season were missing. No organizations on the boardwalk. No band on the stage behind the first base bleachers. No ceremonial first pitches. It was as thought the FNB Field experience was stripped down to the bare minimum.

When three o'clock came, once the Star-Spangled Banner was sung, the Senators' Carson Teel took the pitcher's mound, the Baysox's Cedric Mullins stepped into the batter's box, and with a minimum of fuss the game began. It was, in its way, quite refreshing.

Two pitches into the game, though, Mullins crushed a ball to the concourse in left field, and the Baysox took an early 1-0 lead. 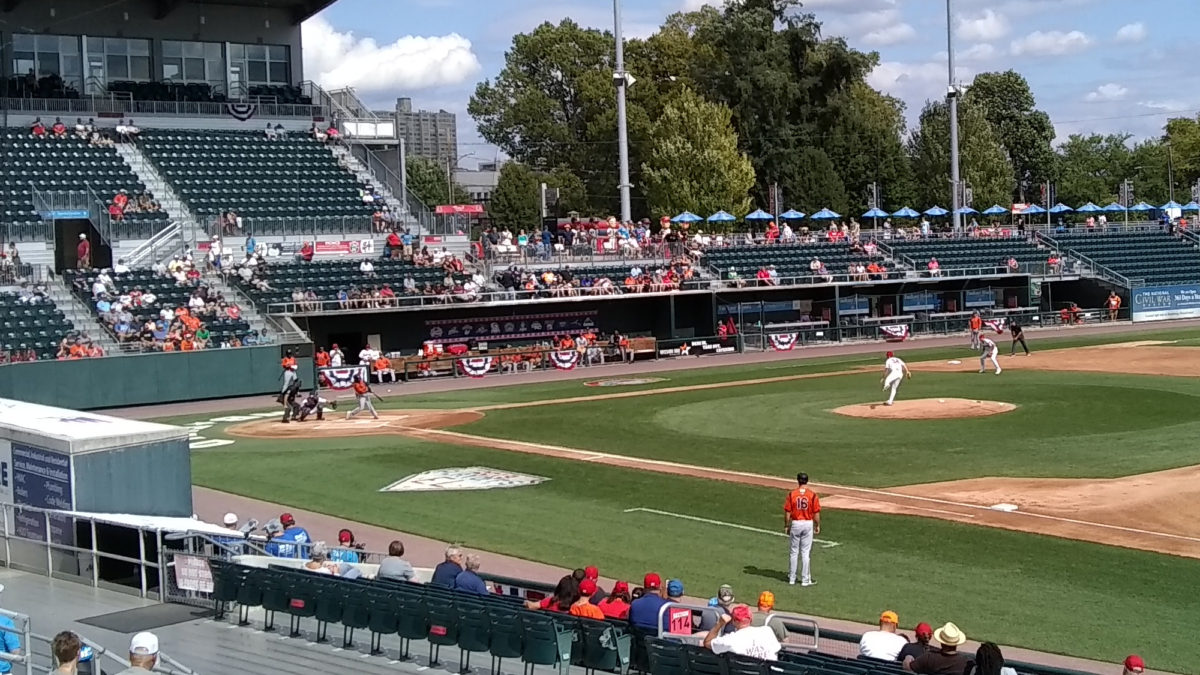 Cedric Mullins crushes a pitch off Carson Teel to left to give the Baysox a 1-0 lead in the top of the first.

The Baysox never relinquished that lead. In the second inning, they sent nine batters to the plate and plated five more runs.

Some bloop singles into shallow right by the Senators in the third put them on the board, but as the score went to 7-1 and then 12-1, the game became a matter of playing out the string. I stopped keeping score. I went and got a beer. I wondered if a position player would pitch. (Alas, no.) 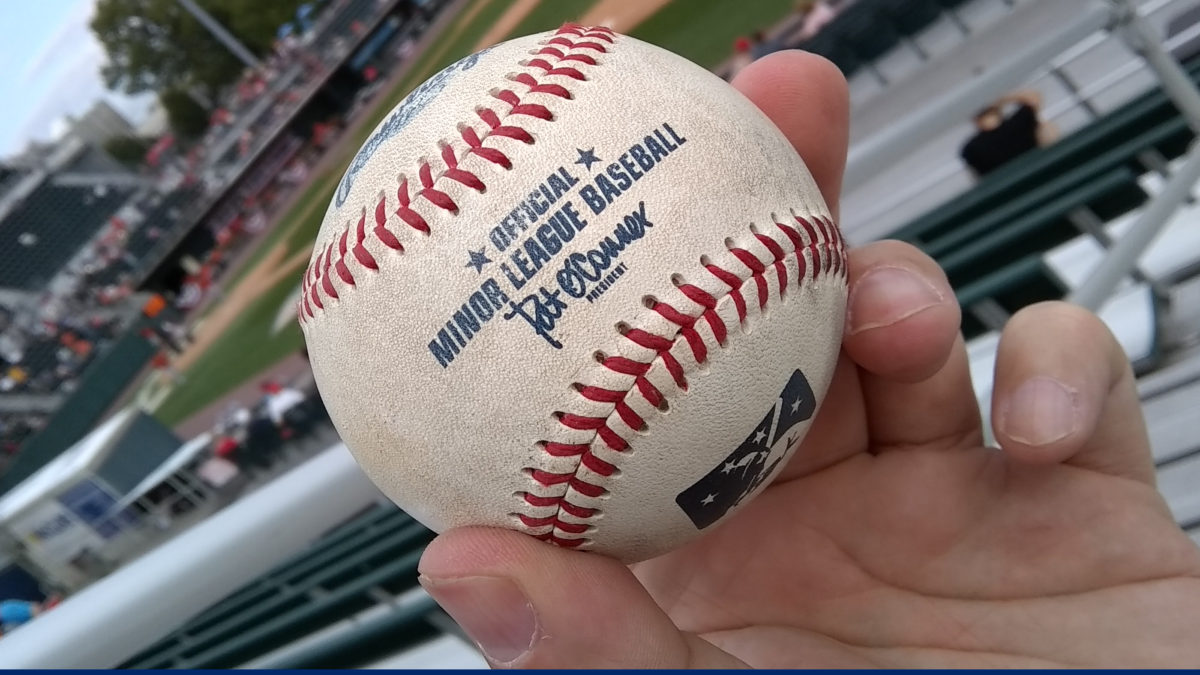 Foul ball off the bat of Dante Bichette, Jr., hit in the bottom of the 7th

In the bottom of the seventh, the Senators scored two runs, to bring the score to 12-3. I also acquired a souvenir -- a foul ball hit by the Senators' Dante Bichette, Jr.

At this point, I began talking to Harrison, a Washington Nationals fan who'd come up from Virginia. There were a number of Nationals fans who'd made the drive from DC, including a father and son a few rows below me; the son was wearing an old Nationals jersey (with the block lettering) that had an RFK Stadium patch on the sleeve. Harrison and I discussed things ranging from the way minor league affiliations work and the dump that was the Pfitz (the Potomac Nationals stadium) to Aaron Barrett and Nick Johnson.

In the bottom of the 8th, the Senators scored two more runs, on back-to-back home runs to left, to bring the score to 12-5. Interestingly, while the Baysox's first baseman Preston Palmeiro had ceased holding runners on base before those home runs, after that point he returned to playing close to the bag to hold the Senators close.

The Baysox didn't add to their lead in the top of the ninth. Down seven, the Senators had one last chance for a comeback, but it was not to be. The game ended on a flyout by Bichette to right. The Baysox's Yusniel Diaz squeezed the glove on the ball, ending the game and clinching the Western Division Championship Series for the Bowie Baysox. 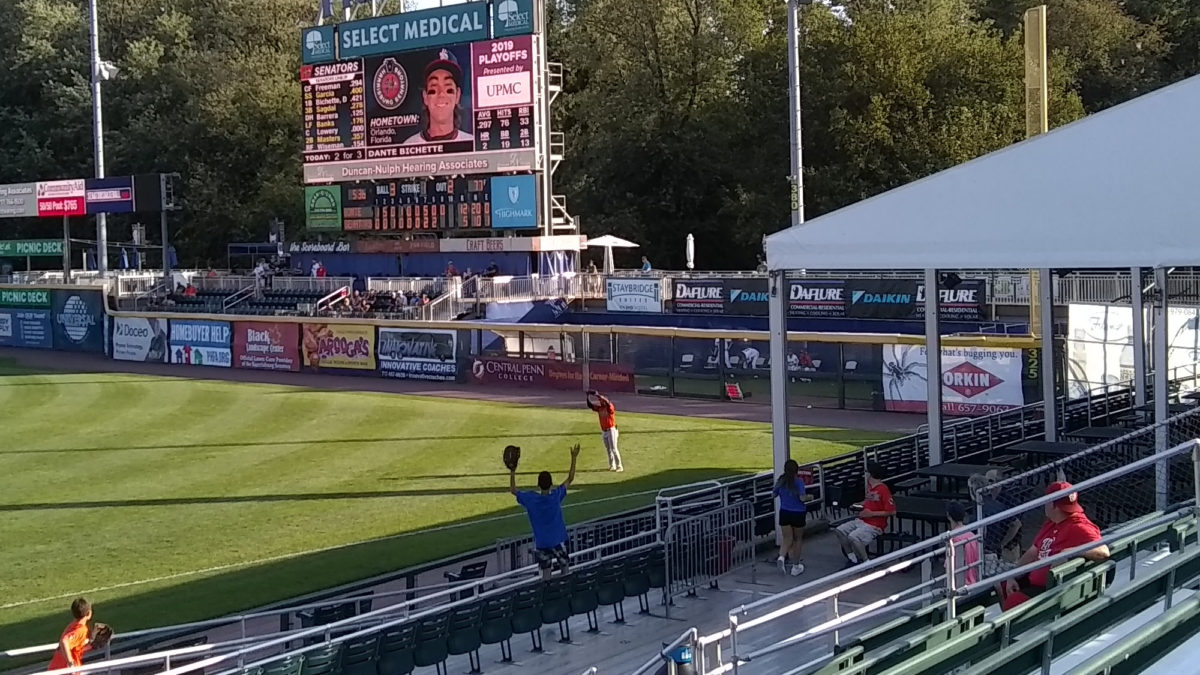 The Baysox's Yusniel Diaz squeezing the glove on Dante Bichette, Jr's fly ball to right to end the game and clinch the Eastern League Division Championship for Bowie.

There was scattered applause from the Orioles and Baysox fans in the stands. On field, there was a muted celebration at the pitcher's mound. 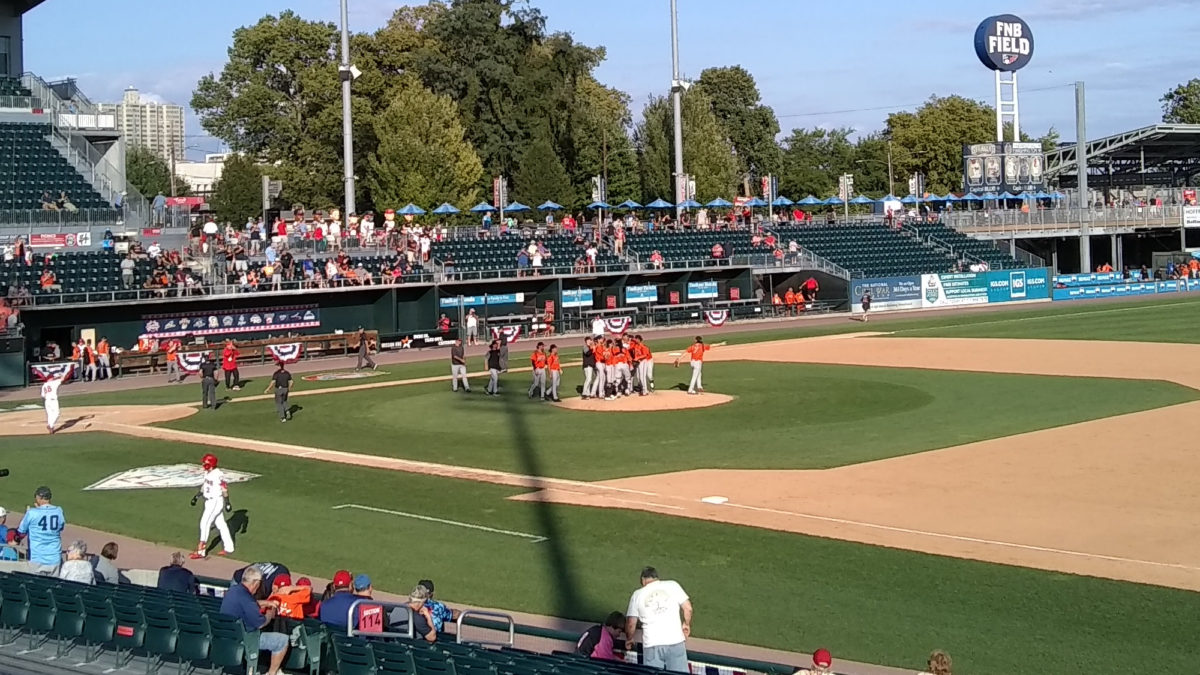 Bowie Baysox on the pitcher's mound, following the final out.

The Baysox will face the Trenton Thunder next week for the Eastern League crown. I have no idea how to predict that series. Flip a coin. Either a sweep either way, or a slugfest that goes the full five games.

As I made my way the stadium, I thanked the Senators staff that I saw for another fun year.

I had to take one more walk across the Walnut Street Bridge. I stopped midway to take a photo of FNB Field. 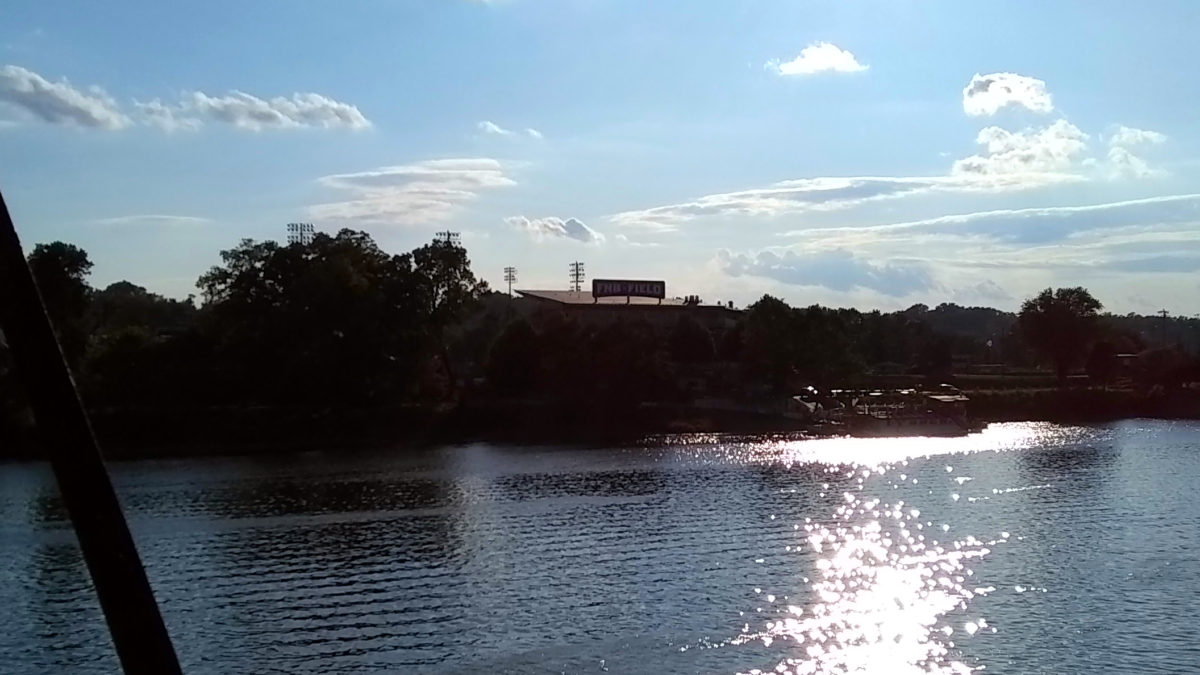 After a few minutes along the Susquehanna opposite the stadium, I walked back across the bridge. I could hear "Good Night" by the Beatles playing on the stadium PA system. I started to tear up.

Anything can happen in a single game or in a short series. I knew the odds weren't in the Senators' favor; I'd expected Bowie to win in four. Yet, in that moment, I felt every bit as gutted as I felt after game five of the 2017 National League Division Series between the Nationals and the Cubs. ( I still have no idea who won the World Series in 2017; despite being a Cubs fan since childhood, I stopped following the postseason that year when the Nationals lost. I just really wanted the Nationals to win that series more.) Sport is intensely irrational.

The Baseball Gods made a glorious day for one of those September days when it seems that summer will never end. But summer does end, it always does, even when feels like it won't, and for the 2019 Harrisburg Senators, their summer came to an end this afternoon and, with it, the summer afternoons and evenings of those who, like me, sit in the stands and spend a few hours, under skies and clouds, in sun and in twilight, as boys play a game that goes on, year after year, and always returns in the spring.