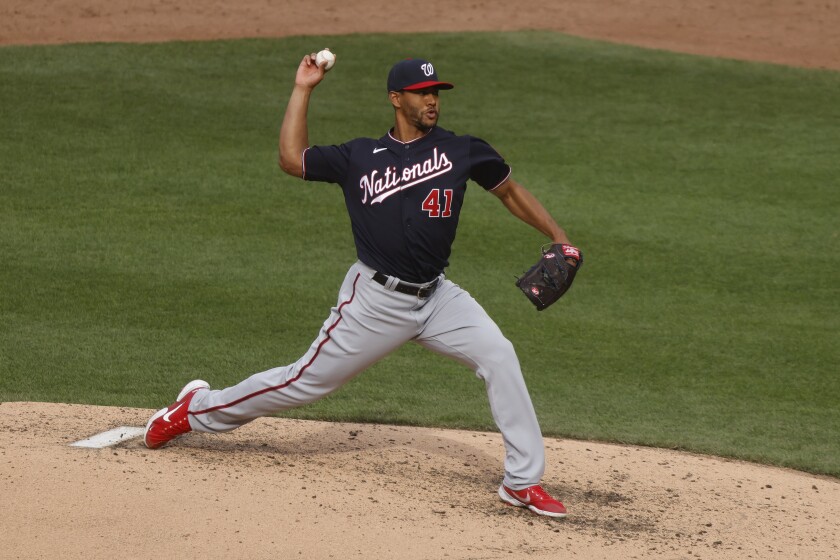 Game 2 of 3 @ Mets
Box ScoreWashington (8-10) 1 1 2 1 2 0 0 0 0 -- 7New York (8-8) 0 0 1 0 0 0 0 0 0 -- 1Game 1: New York 6, Washington 0Game 2: Washington 7, New York 1Achievements:6+ Runs (6th this season)The BadJosh BellThe Nationals' switch-hitting first baseman continued his ice-cold start to the season in Saturday's game, going 0-for-4 with two strikeouts and a walk. His start to the season has led many fans to call for his benching in favor of Ryan Zimmerman, who has enjoyed an all-around hot first month at the plate. Bell has started all of the last five games for the Nationals and, aside from a go-ahead home run on Tuesday, has been nothing short of a liability to the offense. Not exactly the protection for Trea Turner and Juan Soto that was envisioned when the team acquired Bell from the Pirates last December. Davey Martinez would be smart to increase Ryan Zimmerman's share of the starts at first base if Bell's struggles continue.The GoodYadiel HernandezEveryone loves a feel-good story. The 33-year old rookie outfielder went 2-for-4 at the plate, driving in a pair of runs. Although his major league playing time is a small sample size, it does include a walk-off bomb last September and some excellent hits this season. And he hit like a true star in AAA back in the 2019 season, slashing .323 with 33 home runs (and keep in mind that the Minor League season ends in early September, meaning he hit 33 home runs with a month less time). I can easily foresee Hernandez becoming a decent weapon off the bench down the stretch.Joe RossAfter he allowed 10 runs in his last outing, I was under the impression that his success in his first two starts was an aberration. Perhaps, instead, the bad outing was the outlier. Ross put in six solid innings of work, allowing just one run on five hits. Believe it or not, Ross is the first starting pitcher on the Nationals' staff to reach two wins on the young season. The only other Nationals' pitcher with two wins this season is reliever Daniel Hudson.Player of the Game: Yadiel Hernandez (2-for-4, 2 RBI)Note: Although I never got around to creating a recap for Friday's game, the player of the game for that game was Starlin Castro, who went 1-for-3, recording one of the Nationals' two hits.Other ThoughtsInconsistent OffenseAfter three consecutive dismal offensive performances, the Nats' bats brought forth an impressive showing on Saturday afternoon, recording 7 runs on 10 hits. Additionally, they exhibited an ability to manufacture runs, something the entire team has struggled with for much of the season. There is reason to believe that the hitting will find some consistency. Juan Soto will likely return in the next couple of weeks. In Josh Bell's case, either he will find his stride or Ryan Zimmerman will begin to see more starts. In both scenarios, the offensive production at the position would increase. The key is keeping the team healthy, which is easier said than done considering the number of seasons in which the team has been decimated by injury.What's NextThe Nationals and Mets face off on Sunday at 1:05 PM in the rubber game of a 3 game set. The Nats will trot out Patrick Corbin, who will look to build on his excellent performance last Tuesday.